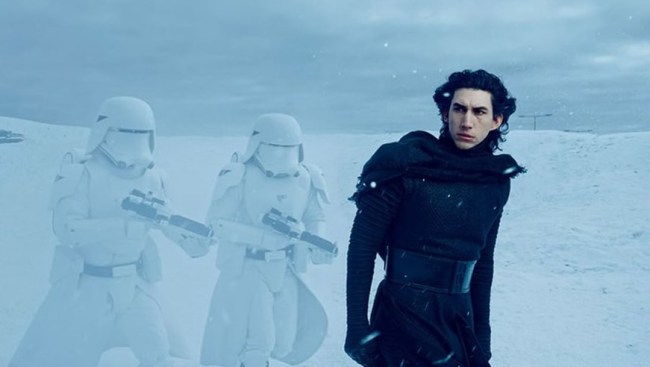 There are only 343 days and 11 hours until Star Wars: Episode VIII comes out in theaters. That is when we will be reunited with the bratty, emo Kylo Ren. Adam Driver (Over a year later, I still can’t believe the dude from Girls was cast as the bad guy in Force Awakens) returns as the Sith apprentice of Supreme Leader Snoke of the First Order. Driver spoke to Larry King (Yes, he survived 2016), and the suspender-sporting talk show asked, “What’s one aspect about Kylo Ren you’re excited for fans to see in the next film?” If you said mascara for men or a new Nirvana T-shirt from Hot Topic, you were close.

“I think — maybe this is such a general answer but you know — humanity. Even though it’s very much a blockbuster movie, there was no taking that for granted and that we were forced to be general. There was a lot of plot points that we knew were operating in the first one, that we get to explain more in the second one, to make both of them make sense. But they do kind of feel socially active to me, and George Lucas originally — a lot of Star Wars was in response to Vietnam and a lot of what I remember talking about with JJ and Rian was this idea of terrorism, and two sides being morally justified to behave however they wanted to to get whatever they thought was absolutely correct.”

You can watch the interview on video here.

Let’s hope that they also upgraded Kylo’s computer area and made it temper tantrum-proof.