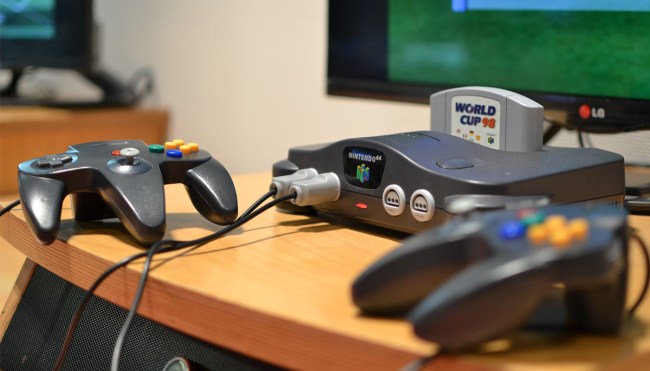 I guess my parents technically “raised” me, but video games definitely created the backbone upon which my ethics and principles were established. I learned about competition, resolve, and how to be petty about almost everything.

Most importantly, I learned how to develop an extremely large chip on my shoulder. When you go home tonight, make sure to give your console a hug and thank it for making you the person that you are today thanks to the life lessons in some of these classic games.

The Legend of Zelda: Ocarina of Time

Aside from the gaming experience being a fantastic time, Ocarina of Time consistently tested your willpower and mettle.

Listen, I’m not ashamed to admit that I may or may not have cried once or twice while trying to complete the Water Temple. Pizza Lunchables tasted significantly less awesome when you were the only kid in the middle school cafeteria with zero idea of how to solve any of those god damn puzzles.

But you know what? You persevered. Maybe you didn’t want to be that guy anymore? Perhaps you were disgusted at yourself because you cried about a video game? No one cares how you did it as long as you did it.

Life Lesson: You can make mistake after mistake in life, as long as you have money.

Our friend, Sonic, has the luxury of doing whatever he wants in his world as long as he has cash on hand. Other than falling to his death, he can pay off his reaper any time something goes awry.

“Oh man, I stepped on a bed of spikes. Good thing I’m flushed with all these RANGZ.” Sonic was recession-proof.

As soon as life starts looking up, everything can come crashing down in an instant.

In two seconds flat, some scrub in 6th place hit you with a lightning bolt and an even bigger scrub in 8th place smashed you with a blue shell. Just like that, you went from the cock of the walk to a stain on Koopa Troopa Beach.

As an addendum to the lesson above, just know that the haters are always watching. Life, bros. It sure comes at you fast.

Arguably one of my most memorable gaming experiences from a “stop acting like a wimp” perspective.

Listen, I’m going to level with you guys here: I never once considered playing this with the lights on. Not just in the room I was playing it in—the entire house needed to be illuminated. Everyone also had to be awake and within a 10-meter radius just in case I had an irrational emotional reaction to a 32-bit zombie attack.

But hey, now I’m a blogger, so I guess it’s okay to be a bitch sometimes and have most of your family think less of you because of a video game.

I’m convinced that this game is effectively a way to suss out those that are capable of surviving in this world and those that can’t; video game Darwinism, if you will.

The game was all about discovering patterns, developing a strategy, and sound execution. Every character (even impossible-to-beat Mike) had a set of timing-based attacks and it was your job to figure it out.

Yes, at times it was difficult, but there was nothing in the game that standard trial and error didn’t fix. If you couldn’t succeed at that, well, honestly, you probably suck at life now and likely can’t even read what I’m typing.

Life Lesson: The world is your oyster

This was one of the first games that made you feel like you can do anything and everything that you wanted with zero repercussions. Granted, we weren’t coming outside in the middle of the night to kill hookers, but it did put us on the train to enhanced entitlement.

In GTA III, you can beat someone with a bat if they bumped you on the street. In real life, you can tell your parents that you don’t have a job because you’re “Trying to get your app off the ground” or “My music career is about to take off” or “I have 4,000 followers on Twitter, that’s my job now.”

Life Lesson: You can cheat your way through life as long as everyone else is doing it

Get off your nerd ivory tower right now if you were against cheating in Pokemon. I mean, look at the world right now. EVERYONE is cheating in some way, shape, or form. You only find out about it when people are dumb and/or get caught.

This also held true in Pokemon. Rare candies were PEDs and Master Balls were Pokemon chloroform. Personally, my Mewtwo was chock full of more amphetamines and vitamins than Barry Bonds.

If you weren’t trying hard enough to win those ultimately pointless link-cable Pokemon battles that you had with your friends on the school bus, you scoffed at the idea of success.

Remember, kids: cheat any chance you get but, make sure that you do it more intelligently than everyone else.

Life Lesson: Sometimes you have to do certain things in life just to fit in

I grew up in a primarily black neighborhood with nary a skateboard in sight. If you weren’t playing basketball or baseball, you were relegated to being a nerd that dug in the dirt and got stuffed in lockers.

No matter how independent and free-thinking you are, sometimes you have to roll with the punches in life. With that said, when everyone inexplicably got Tony Hawk Pro Skater on Y2K Christmas, I quickly needed to become a skateboarding expert. Jump shots were out, kickflips were in.

I might have even hopped into a Pac-Sun at some point just to absorb some vibes. Not proud of it, but sometimes you gotta do what you gotta do.

Life Lesson: Sometimes you have to squeeze a few lemons to make lemonade

No one said that these lessons were going to be “good” lessons. Sometimes you have to take advantage of the weak to advance in life.

For example, someone re-spawns in the Facility in a match where proximity mines are in play. There is absolutely nothing wrong with throwing an inordinate amount of mines into the vents so that person has to make a horrifying decision: live the rest of their digital life in a vent or die via horrible explosion.

Your kill count goes up, their pride comes down. I think that’s what Lion King meant by the Circle of Life. Hunt or be hunted, bruh.