‘Dancing With The Stars’ Featured An Accidental Crotch Grab And Of Course, The Internet Took Notice 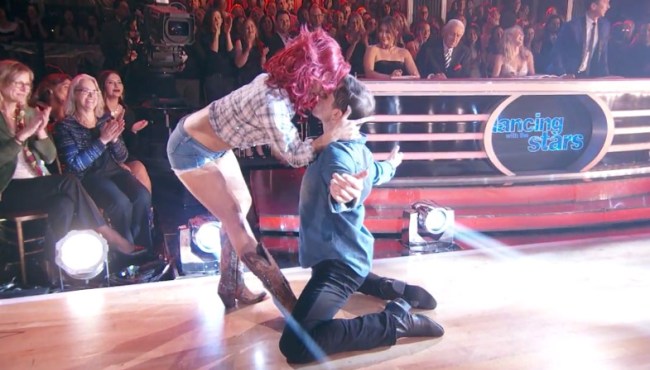 Professional bull rider Bonner Bolton and dancer Sharna Burgess performed a very rousing and sensuous rendition of the cha cha during their turn on stage.

Fans, as one can see in the video above, seemed to really enjoy their performance. However, it was immediately AFTER their dance that fans of the show really noticed their chemistry when Bolton looked to have placed his hand on Burgess’ crotch.

In a normal world, this probably would have been noticed by a few people and been no big deal.

This is not a normal world. This is a world with screengrabs, saved video and, of course, Twitter, where fans of the show pretty much lost it.

Keep your hands to yourself, buddy. pic.twitter.com/iVoj7AcPLc

I guess Bonner Bolton is a Trump fan… #DWTS pic.twitter.com/nw3IigN75R

@SharnaBurgess Did I just see @bonner_bolton pull a Donald Trump and grab the P***y? This is a family show

The moment was not lost on Bolton, who after the show spoke to Entertainment Tonight…

“I was just stargazed by Nick and Peta’s performance and I was looking at the TV screen,” Bolton recounted. “I felt her bump into me yet I wasn’t really looking at what was bumping into me.”

“There was some hand placement that went south, so to speak,” he said, stressing that the entire moment was “totally unintentional.”

Burgess, for her part, said it was really just nothing…

Anyone who has the ridiculous idea that it was intentional…is straight up stupid. As in lacking th intelligence to realize it was innocent

That being said, I bet you that ratings of the show will be up next week.