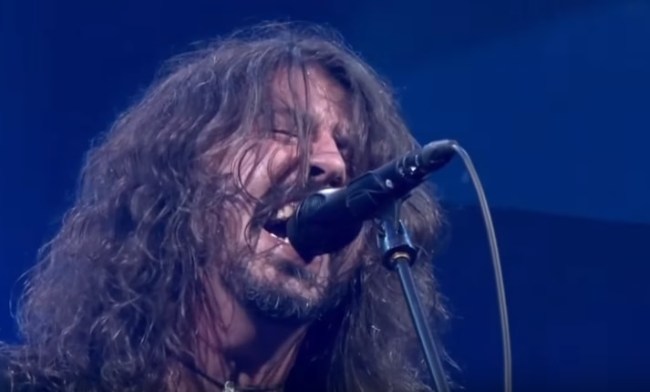 The Foo Fighters put on an epic show while headlining Glastonbury on Saturday night. Besides playing their all-time hits, making dedications to naked dudes and Foo Fighters fans who died from cancer, Dave Grohl spent his tome on stage swearing. Cursing while performing at the Glastonbury in the U.K. is highly frowned upon. Dave Grohl doesn’t give a fuck.

Last year, Adele was headling Glastonbury and couldn’t stop fucking cursing. By the end of her show, the talented singer belted out 33 swear words or a curse word every 2.7 minutes during her 90-minute set. Dave Grohl is not one to shy away from expressing himself freely or a challenge.

“We were doing an interview and someone said, ‘you know you’re not supposed to swear – there’s no swearing on Glastonbury,'” Grohl revealed at the Pyramid stage. “I was like, what the fuck is that supposed to fucking mean? And then I guess, Adele holds the record for the most fucks in a Glastonbury appearance. Now I love Adele, but guess what.”

During their headlining performance at Glastonbury to the tune of the 2006 song “Skin and Bones,” the Foo Fighters frontman led the entire Glasto crowd in a chant of “fuck, fuck, fuck, fuck!”

In a previous interview Grohl revealed that he had “anxiety-driven Tourette’s:

“You aren’t allowed to fucking swear at the show? Good luck. Oh god, they are in for a big surprise with that one. Shit I didn’t realize that. We swear the whole fucking time. I basically say fucking in every sentence. I think I have anxiety-driven Tourette’s.”