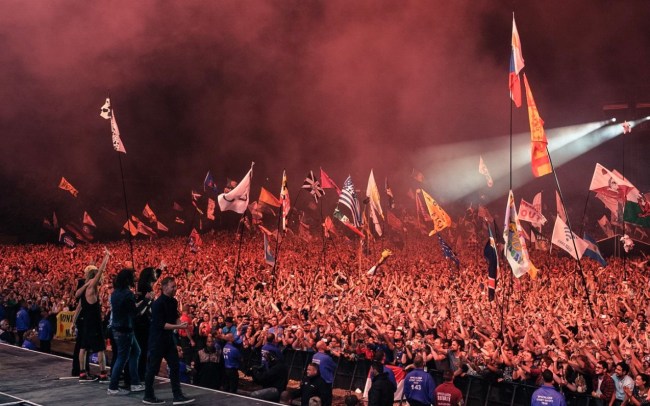 The Foo Fighters rocked the huge crowd at Glastonbury on Saturday night as they performed in the headline slot. The band made several dedications throughout their earth-rocking performance including to one naked man in the crowd and one special Foo Fighters fan that was not able to attend the festival.

Grohl spotted a naked dude in the crowd and said, “It’s starting to get good! I see a naked guy! This one’s for him.” The Foo Fighters then appropriately played the song “My Hero” from their 1997 album “The Colour And The Shape.” You’d surmise that the naked gentleman would be excited to get a shoutout by Dave motherfucking Grohl, but I’ve seen the nude pic and it was nothing to write home about.

This is a sweet return to Glasto for the Foo Fighters since they were forced to cancel their 2015 headline gig at the festival after Dave Grohl broke his leg. “I’m about two years late tonight, I’m sorry. Traffic was a bitch,” Grohl joked. “Let me tell you something, for all of you who were here in 2015… I’m sorry I missed you. But I watched that show on my laptop as I was sitting in a wheelchair with a broken leg, and it looked beautiful.”

Speaking of Grohl’s broken leg, the Foo Fighters frontman thanked his surgeon, James, for fixing him up so that he could later continue that tour in 2015. Grohl tongue-and-cheekily dedicated the song “Walk” to his doctor.

The Foo Fighters weren’t done dedicating songs to people who touched their lives. The band dedicated arguably their greatest song in “Everlong” to a British teacher who passed away after a battle with cancer after eight years. Jon Plane contacted Grohl on Twitter and explained how he and his wife Laura were massive Foo fans and even played “Everlong” as their first dance at their wedding. The couple had planned to watch the Foo Fighters in the U.K. for their 10 wedding anniversary. Sadly, Laura passed away from cancer last month and was not able to see the Foo Fighters perform at Glastonbury, but Grohl made sure she could hear him.

Grohl replied to Jon with a personal note on a piece of scrap paper. “Jon – Dave here. Heard about Laura. Sending you much love and hope and light. Will be thinking of yous at Glasto. Take care mate.”

The Foo Fighters closed out their epic Glastonbury performance with “Everlong,” and Grohl dedicated the song to Laura.