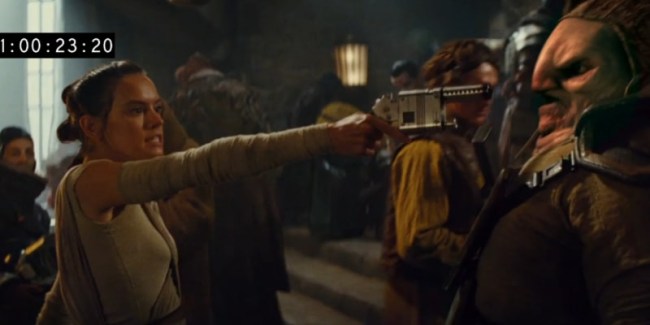 When Disney owns your movie franchise you get the best production values and marketing money can buy. However, you also have to reach the widest range of audiences and that includes kids. Merchandising to children is where the real money from the movie is made. Star Wars-the T-shirt, Star Wars-the coloring book, Star Wars-the lunch box, Star Wars-the breakfast cereal, Star Wars-the flamethrower.

So that means you can’t have violent scenes in your Disney movies, and that is why this deleted scene of Chewbacca ripping off Unkar Plutt’s arm did not make the cut to the final version of Star Wars: The Force Awakens. Not sure parents would appreciate their 4-year-olds being traumatized by seeing someone’s arm being town off.

In the deleted scene, Plutt confronts Rey at Maz Kanata’s fortress bar. And as you know, nothing good happens at intergalactic bars full of drunk aliens. Chewbacca steps in to defend Rey, but Plutt is not intimidated by the wookie.

“I’m not afraid of you,” Unkar boldly says to the wookie. Chewbacca then grabs and twists Plutt’s right-arm, steps on his foot for leverage, and rips off his limb.

The junkboss of Jakku makes the mistake of upsetting a wookie. It’s never wise to upset a wookie.