Moby From The Top Rope With Claims Of DAMNING Information About Donald Trump’s Ties To Russia!!! 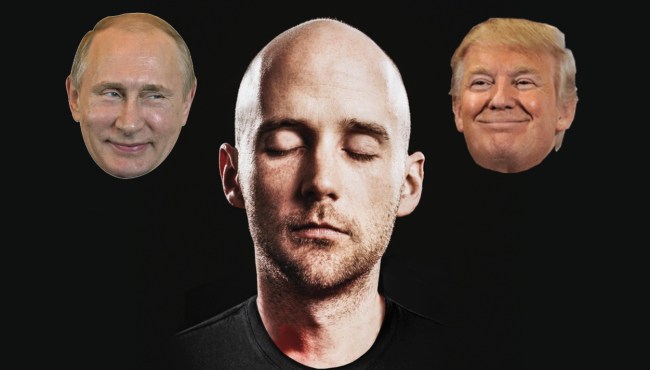 Of all the people to potentially have compromising information about Donald Trump’s relationship with Russia and bring it to light… BAH GAWD IS THAT MOBY’S MUSIC!!!?

So I can’t exactly remember the last time Moby was relevant, and that’s meant in no way shape or form as a slight to Moby because ‘Bodyrock’ was literally the best song on the FIFA 2001 soundtrack, but the electronic musician has thrust himself back in the spotlight with some interesting, shall we say, “claims” with regards to President Donald Trump and his alleged ties to the Russian government and Vladimir Putin.

I can’t tell you how someone goes from being a DJ to finding himself conversing in the ranks of government spies and intelligence officials, but I can tell you that the things Moby had to say about the POTUS would be essentially damning any way you cut them, if true. Huge “if” there, mind you. This is Moby we are talking about after all, and only America’s democracy at stake. No big deal.

In short, the musician states that the salacious details included in the leaked dossier are “100% real,” and he believes the Trump administration is in “collusion with the Russian government, and has been since day one,” allegedly with the aim to provoke a war with Iran.

And if, for some reason it is deleted, because this is the internet and things like that happen, here’s the full text from Moby’s outrageous claims.

after spending the weekend talking to friends who work in dc i can safely(well, ‘accurately’…) post the following things:

1-the russian dossier on trump is real. 100% real. he’s being blackmailed by the russian government, not just for being peed
on by russian hookers, but for much more nefarious things.

2-the trump administration is in collusion with the russian government, and has been since day one.

3-the trump administration needs a war, most likely with iran. at present they are putting u.s warships off the coast
of iran in the hope that iran will attack one of the ships and give the u.s a pretense for invasion.

5-intelligence agencies around the world, and here in the u.s, are horrified by the incompetence of the trump administration, and are
working to present information that will lead to high level firings and, ultimately, impeachment.

these are truly baffling and horrifying times, as we have an incompetent president who is essentially owned by a foreign power.

So, ummmm….does Moby know something we don’t? Guess only time will tell.