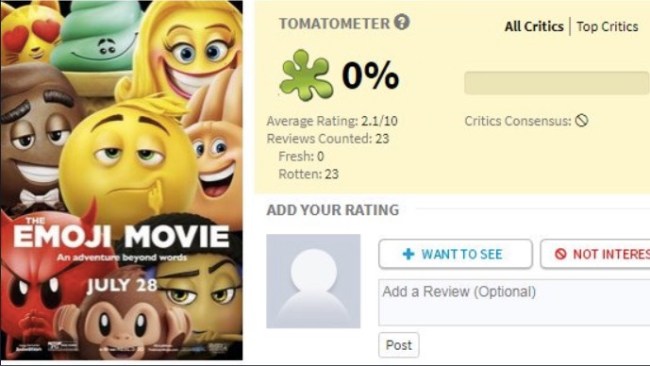 “Unfunny.” “Waste of time.” “Brutally depressing.” These are just a few of the phrases used to describe The Emoji Movie, which at the time of me writing this, has a 3% Rotten Tomatoes rating–the worst reviewed movie of the year.

T.J. Miller, who voices the “Meh” emoji character and Stewart the poop emoji, cited PG-rated  Emoji Movie as a “great film” and a project he was very excited about following his departure from HBO’s Silicon Valley.

“Between Poop and Gene Meh, the characters’ names provide a more succinct and effective Emoji Movie review than I ever could.”

Thanks to this review, The Emoji Movie has jumped up to tie with Jack and Jill at 3% pic.twitter.com/tAKNoa7QxY

The gripe with the movie, other than its shallow story powered by tired, corny “believe in yourself” themes, is that it’s nothing more than a giant advertisement. Sony partnered with apps that are placed in the film to shamelessly generate revenue dollars from product placement.

The movie, which packs star power such as James Corden, Anna Faris, Maya Rudolph, Christina Aguilera, Sofia Vergara and Patrick Stewart, is tracking to earn in the $25 million to $27 million range, but the abysmal, ubiquitous reviews after its release may dampen that number.

The movie itself isn’t the only alleged dumpster fire, the marketing for the movie has been idiotic as well. Take this ad for example, which tries to be hip by emoji-ing Hulu’s hit TV show The Handmaid’s Tale. This would have gone over a lot better if the show wasn’t about a dystopian society where women are habitually raped. Once the marketing folks at Sony realized this, the tweet was deleted. 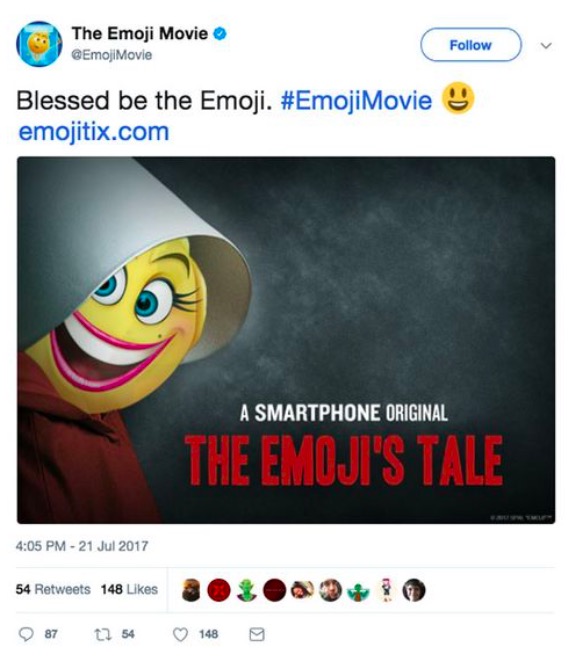 Some funny tweets to end on:

Any word on how The Emoji Movie looks in 70mm?

i know that history was made last night, but please don't let obamacare's survival overshadow the emoji movie's opening day

Real talk, if you go out to see the emoji movie as a joke, ya'll better not be surprised when sony ends up making enough money for a sequel

Do your best to block out the haters, T.J.