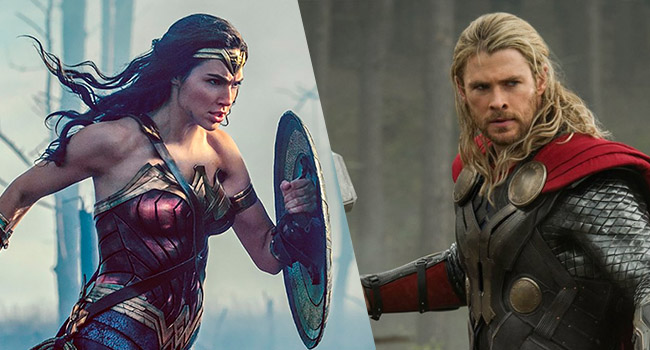 While being something that will probably only happen in our imaginations, how cool would it be for the DC Comics superheroes to work alongside, or even against, Marvel’s batch of comic book legends? That would be some big-time box office history when it comes to printing money.

Wonder Woman, who has been dominating both at the box office with a domestic take of over $100 million so far, as well as with critics, will sadly never get the chance to face off against the likes of Marvel’s Thor.

However, that doesn’t mean that the stars of the two franchises can’t dream like the rest of us.

“Now they asked me who would win, Wonder Woman or Thor? And I think it’s Wonder Woman. Don’t you, Chris?” says Gadot in the video.

Hey @chrishemsworth — @GalGadot has something to ask you… #wonderwoman https://t.co/XWrDANhsaT pic.twitter.com/wDZDZpIemt

The next day Gadot got her answer…

Gadot, naturally, agreed, but said that to be sure, they should get together and actually find out.

I always knew you were a smart guy 🙂 But I think its worth a fight . we should collide worlds😏

“I always knew you were a smart guy 🙂 But I think its worth a fight. We should collide worlds,” responded Gadot.

Anyone at Marvel and DC seeing dollar signs after that exchange? Because they should be.

As for whether there will be a second Wonder Woman film? Umm, duh, yes, there will be and it will be set in America, according to director Patty Jenkins in an interview with Entertainment Weekly.

The 45-year old filmmaker is already thinking ahead to what a second Wonder Woman film might look like. She can’t give away many story details, but does say it would be set in America. “The story will take place in the U.S., which I think is right,” she said back in April in an interview with EW. “She’s Wonder Woman. She’s got to come to America. It’s time.”

Warner Bros. declined to comment on its future plans for the franchise, but considering this film’s strong reception from fans and critics alike, betting on the director for a sequel would be the smartest approach. And if that call comes, Jenkins is game to return, having formed a tight bond with Gadot and the filmmaking team behind the movie.

“I’m not a big obligation person when it comes to art. You want to do a movie like this because you believe in it,” she said. “Then I had this revelation in the middle of the night: this is your dream cast, you’ve created a character that you love and you can say anything you want in the world right now.”

Jenkins added, “Then I realized that Wonder Woman 2 is its own great movie. I made Wonder Woman. Now I want to make Wonder Woman 2. It’s a beautiful story to tell, an important time to tell it and with people that I love.”

Oh, by the way, Jenkins was once attached to direct Marvel’s Thor: The Dark World, according to The Hollywood Reporter.

Coincidence or harbinger of the future? Only in our comic book dreams. Probably.