Look out! Here comes the Spider-Man in a new video game. The upcoming game was given a lengthy debut during Sony’s PlayStation press conference at E3 2017. The 9-minute trailer for the PS4-exclusive video game shows some high-flying, web-slinging gameplay.

The upcoming Spider-Man game is being developed by Insomniac Games and sees Spidey swinging his way through New York City as he fights crime. Your friendly neighborhood Spider-Man battles Kingpin’s goons and Mister Negative, who possesses superhuman strength and has powers derived from a mysterious dark, electrical energy.

This version of Spider-Man is technologically more advanced than other web-head varieties. Peter Parker’s new suit features mechanical moving eye plates and an assortment of web-shooting options. There’s also a stealth ability that would allow Spidey to sneak up on enemies. The fighting in the game appears to be modeled after Rocksteady’s Arkham Asylum series of games.

There’s no need to scour the trailer looking for hints about the upcoming Spider-Man movie because the video game and the movie are not related despite release dates in the same time period.

Make sure that you stick around to the end of the video where a special appearance by Miles Morales, who is the most popular non-Peter Parker version of Spider-Man and first appeared in 2011, following the death of Parker. 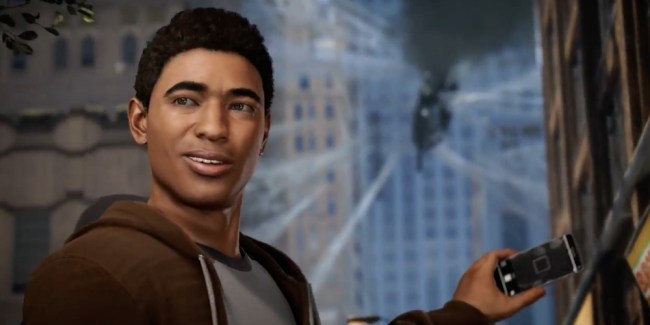 Insomniac Games originally planned for the game’s release to be in 2017, but it has since been delayed and is currently scheduled to release in 2018 exclusively on the PlayStation 4 and PlayStation 4 Pro.