One of the all-time great episodes of The Office is “The Dundies”, the first episode in the second season when Pam gets wasted at a Scranton Chili’s Grill & Bar. Perhaps you’ll recall this line: 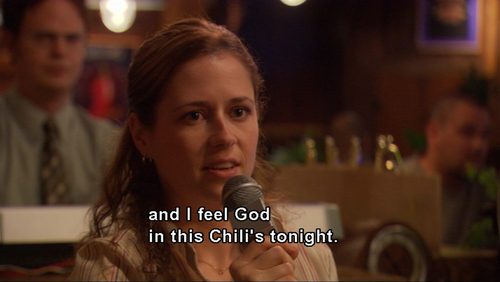 Actress Jenna Fischer recently revisited her character’s obsession with the chain on Twitter, making for an all-time great The Office-meets-real-life moment:

Should I try to go in? pic.twitter.com/HDpPqzA0by

The restaurant chain nailed their response:

And then decided to lift their permanent ban on Pam Beesley in an official press release:

Effective immediately, Chili’s® Grill & Bar has removed the longstanding ban on a Scranton, Pennsylvania woman who allegedly caused a disturbance during a company awards party held at a Chili’s near the Pennsylvania town of Scranton.

The woman, Pam Beesly Halpert, received a prestigious award for having the whitest sneakers in the company.

After thanking her shoes and coworkers, the woman declared, “I feel God in this Chili’s tonight.”

“After reviewing the good conduct of Pam, I have decided to lift the now 11-year ban,” said Kelli Valade, President of Chili’s. “Pam is an inspiration to many and we welcome her with open arms.”

What’s in the past is in the past. Bro move, Chilis’s. Glad you and Pam can move on now. She deserves all the jumbo margs and babyback ribs.