‘Iron Fist’ Sidekick, Actress Jessica Henwick, Is One Badass Babe Off The Show As Well 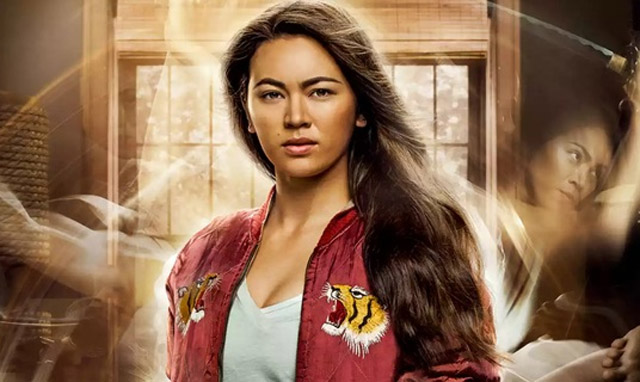 So have you been watching the latest Marvel superhero show on Netflix, Iron Fist?

It’s gotten pretty bad reviews, but I watched several episodes over the weekend and I have to admit that I might in the minority, but I like it.

(HEADS UP! POSSIBLE SPOILERS AHEAD!)

One of the things I like most about the show is the portrayal of Iron Fist’s sidekick and kinda, sorta love interest Colleen Wing played by 24-year-old Jessica Henwick.

If Henwick looks familiar to many of you, that’s because you’ve either seen her playing Nymeria Sand on Game of Thrones or perhaps caught her as pilot Jessika Pava in Star Wars: The Force Awakens.

With a very Game of Thrones-esque nickname, “Daughter of the Dragon,” Henwick wields her katana and destroys men twice her size in illegal cage fights as dojo owner Colleen Wing.

Over the weekend Metro released an interview the did with Henwick that gives us a glimpse into what goes into the obviously very-demanding role. Here are a couple of highlights…

Some of my favourite scenes in Iron Fist have been the cage fight sequences with your character – what were they like to shoot?

I’m not going to lie, it’s painful to shoot those. It’s painful physically because a normal film day is 12 hours, and on those cage fights we were doing just the cage fights for two days in a row. So it was just 12 hours of me grinding my body down, but it’s so much fun. Like I had the real crowd there and they were cheering me on; they were like ‘yeah girl get it!’

When you’re an extra and you’re going in for a fight scene, they just expect to come and see the stunt double do everything and me to come in and do some expression shots. But really, if you watch it you can see, I’m in it. I did have a wonderful double who did the things that I couldn’t do, but all the extras there were pleasantly surprised when I started punching people in the face.

Oh you fully go-in on that guy too – blood splashing all over your face.

Oh isn’t that great?! You can see the tiny glint in her eye and you see her start to grin. They’ve cut it a bit short, because originally we went much longer and Colleen revels in it – she’s like grinning ear to ear. She’s soaking it up, the blood is splattering all over her face. I think they actually toned it down but I like it, it’s subtle, you do see that glimmer [where] she gets a real kick out of it.

It’s interesting because another reason why I thought she’s so unlike anyone I’ve ever seen, is she’s going to this cage fight A. For money. But also because she gets a kick out of it. She gets an adrenalin rush from pushing her body to the limits and from taking down these guys who don’t appear to be very nice. So when Danny comes into her life and she gets dragged into his troubles, you notice she doesn’t go the cage fights anymore because she doesn’t need to, she’s getting her adrenalin kick out of him. As much as she tells him, ‘get lost’, she still turns up to help him because she can’t help it. She’s addicted to that buzz. To see a female lead using the male lead to get an adrenalin buzz, using the situations he finds himself in, that’s so rare.

Were you training alongside Finn for the role? Did it ever get competitive?

I would say it was competitive at the very, very beginning. I would take pictures of my muscle gains and I would send it to him, like ‘do you even lift bro?’ There’s a picture on Instagram that I posted up the other day, and that’s one of the pictures which I sent to Finn and I was like ‘you ain’t got nothing’ and then he would send one back and I was like ‘oh..’ because we both really transformed our bodies for this. If you look at physically how we look on Game Of Thrones versus how we look on this it’s a world of difference.

We didn’t get to train that much together actually, except on the weekends sometimes we’d go to the same gym. But we don’t really have many fights together. We have one in episode three and then a couple later on, but Colleen is interesting in that she really has her own storyline and she really drives that – so a lot of my fights are solo. Without him, I mean. I’m not punching myself.

Check out the rest of the Metro interview with Henwick here.

And here are a few more, less athletic, but no less enjoyable, photos Henwick has shared on her account.