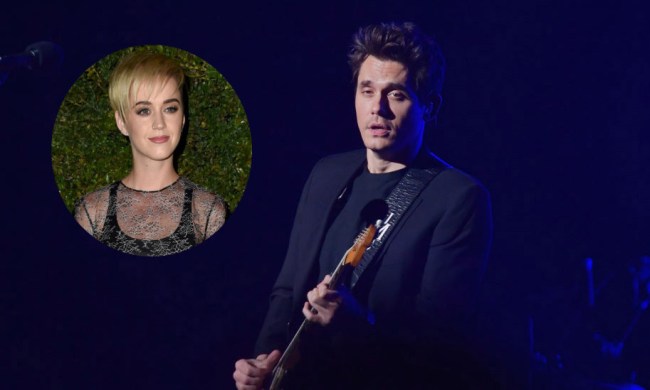 John Mayer, who once compared having sex with Jessica Simpson to “sexual napalm,” must have also set off a few fireworks in the bedroom with one Katy Perry back when they were dating.

As you may recall, Perry was on a recent live-stream binge on YouTube when James Corden asked her to rank her exes Mayer, Orlando Bloom and Diplo in bed, asking, “From best to worst in bed, rank John Mayer, Diplo and Orlando Bloom.”

After a bit of cajoling and saying, “They’re all amazing lovers and I would have sex with all of them after I get out of this place!” Perry finally admitted that Mayer was tops, followed by Bloom then Diplo.

I don't even remember having sex

I won the bronze metal in sex Olympics 🥉 pic.twitter.com/RD2PanuCue

And now, in a new interview with Rolling Stone where he discusses how he has how his life has improved, Mayer also addressed his ranking as Katy Perry’s former sex partner.

You were just in the tabloids because Katy Perry called you the “best lover” she’s ever had. Care to comment?

I don’t have a cool-enough thought for you. I’ve hacked this game. I pay very little of the price of fame now. I get to play the music that moves me the most. I’m having the time of my life. I’m 39 – I remember 32. I don’t wanna do it again.

I truly don’t know what any of that means, but I do know that Mayer wrote the song “Still Feel Like Your Man” with Perry in mind so maybe these two kids, who obviously have some serious chemistry should give it another shot.