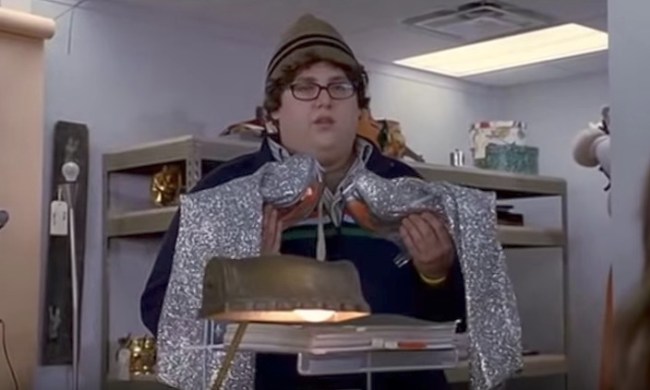 Jonah Hill has gone from that weird kid in The 40-Year-Old Virgin trying to buy women’s thigh-high boots with goldfish inside of them to one of Hollywood’s favorite actors. The 21 Jump Street franchise boosted his career into the next stratosphere.

Jonah Hill was pleasantly plump for the 21 Jump Street films but not downright obese. You could say that he would’ve been shopping in the ‘husky’ section but not at the Big & Tall store. However, in War Dogs Jonah was so large that I was genuinely worried for his health while watching that film on a flight back from Iceland a few months ago.

According to UNILAD, Jonah Hill had to gain 40 pounds for his role in War Dogs. The body can only handle so many massive weight fluctuations before it starts looking like a deflated football, and Jonah Hill has endured more than his fair share of ups and downs throughout his career.

If you’ve seen recent photographs of Jonah Hill you might have been shocked to see that he’s looking trim, healthy, and kind of like a Russian bookie:

Recently, Jonah Hill spoke with Jimmy Fallon (and Vulture/Hollywood Star) and the topic of his weight loss/fluctuations came up and it turns out that Jonah can thank a single snarky comment from 21 Jump Street co-star Channing Tatum for his remarkable weight loss:

I gained weight for this movie War Dogs, and then I wanted to get in better shape, so I called Channing Tatum, and said, ‘Hey, if I ate less and go to a trainer, will I get in better shape?
And he said, ‘Yes, you dumb motherfucker, of course you will, it’s the simplest thing in the entire world. (via Mirror UK)

Being healthier came along with maturity, and it’s hard, because a lot of times people want you to be the guy you were when they met you.
And I love doing funny movies, but I want to mature, literally, in how I treat myself. I’m not living in a frat house with a bong plastered to the table.
But all this stuff [points to his body] is just part of maturing in body and in mind. I just want to be a good man and to make my family proud. And, you know, I want to live a long time. (via Vulture)

It’s not rocket science. Eat healthier. Work out hard. And you will lose weight/get in shape. It’s almost unfathomable that Jonah Hill needed Channing Tatum to tell him this. Channing is busy this weekend opening a ‘Magic Mike’ male dancer style strip club in Las Vegas. He’s one of the most genetically fortunate bros on the planet, staying shredded 24/7/365. If I’m asking someone for weight loss advice it’s probably going to be a trainer or someone who grapples with over-eating and/or weight gain if they don’t keep it in check. Not the dude that looks like a Greek statue.

Anyways, great for Jonah Hill on getting thin again. Hopefully, this time around he learned to stop putting his body through torture for roles.