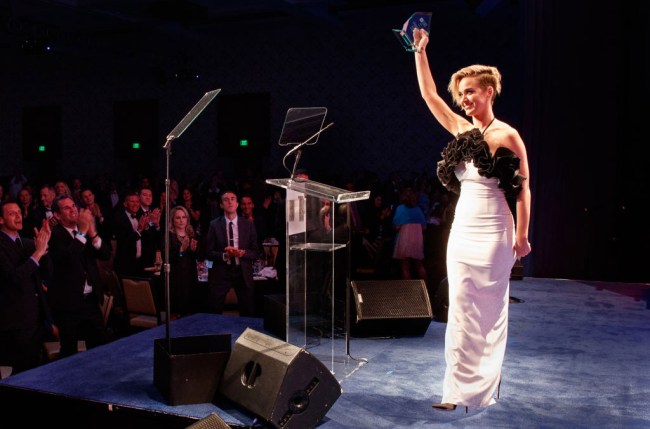 During her speech Perry referenced her 2008 hit “I Kissed a Girl and I Liked It” and the inspiration behind it.

“I speak my truths and I paint my fantasies into these little bite size pop songs. For instance, ‘I kissed a girl and I liked it.’ Truth be told — a) I did more than that, but b) how was I going to reconcile that with a gospel singing girl raised in youth groups that were pro-conversion camps? What I did know was that I was curious, and even then I knew that sexuality was not as black and white as this dress.”

“And honestly, I haven’t always gotten it right, but in 2008 when that song came out I knew that I started a conversation and a lot of the world seemed curious enough to sing along, too.”

Perry also discussed her religious upbringing with two pastors as parents, saying that she “prayed the gay away at Jesus camps,” but soon her “bubble started to burst.”

“These people were nothing like I had been taught to fear. They were the most free, strong, kind, and inclusive people that I have ever met. They stimulated my mind, and they filled my heart with joy, and they danced with joy while doing it. These people are actually, magic, and they are magic because they are living their truth.”

Can I get an Amen?