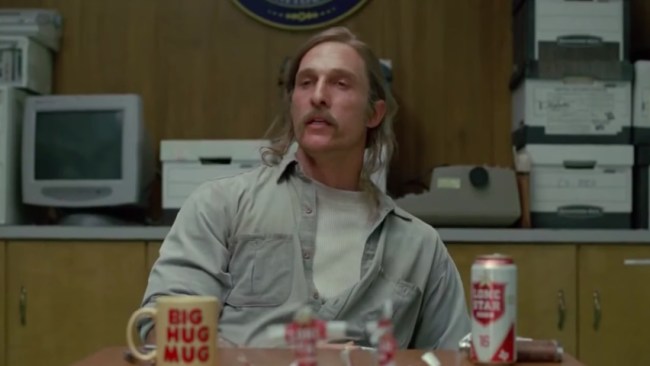 Do you miss Rust Cohle’s nihilistic ruminations about life, death and the fourth dimension? Of course you do. And so does Matthew McConaughey who played Rustin “Rust” Cohle in Season 1 of True Detective.

“I miss Rust Cohle, man,” McConaughey confessed on the Rich Eisen Show. “I miss watching him on Sunday nights.”

“I was a happy man when I made that for six months, because I was on my own island,” the actor said. “Luckily my wife put up with me.”

When asked about reprising his role as Rust, the Academy Award-winning actor said, “It would have to be the right context, the right way.”

So you’re saying that time is a flat circle where events will continually repeat over and over again, thus then another amazing season of True Detective?

“That thing—when I read [the original script] I knew in 20 minutes if I can play this guy, Rustin Cohle, I’m in,” McConaughey told Eisen.

The second season of the Nic Pizzolatto-created show featuring Vince Vaughn, Rachel McAdams and Colin Farrell was a disaster. It was so bad that it caused HBO to change course and put Season 3 on the back-burner and maybe even end the series. However, with McConaughey back in the saddle as Rust, HBO can say, “fuck the anthology format,” and make True Detective great again.