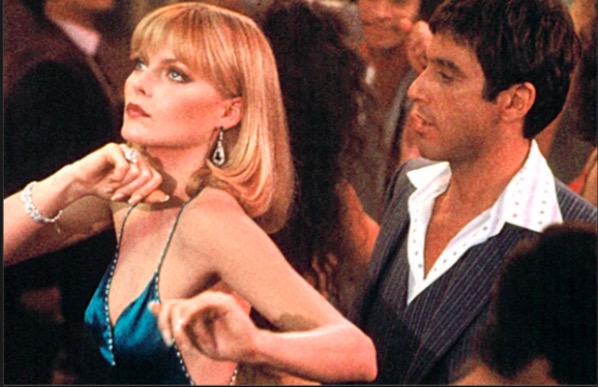 Scarface director Brian De Palma and Al Pacino resisted auditioning Michelle Pfeiffer for Elvira, Tony’s bitter trophy wife, since she was just rebounding from a colossal flop in Grease 2. A producer named Martin Bregman talked the two into giving her a shot, and the rest is history. Pfeiffer played the sultry, mysterious, battered wife of a sociopath to near perfection and it catapulted her into superstardom.

Now, 34 years after her breakout performance in the culturally ubiquitous crime drama, the 58-year-old Pfeiffer speaks about the trials and tribulations of filming in a dude-heavy environment where the few women had anything but empowering roles. The word ‘fuck’ is used at least 207 times in the 170-minute movie, no shortage of which were directed at Pfeiffer’s character.

In an interview with Darren Aronofsky for Interview Magazine, the three-time Oscar nominee says of her time filming Scarface:

“I can tell you that I was terrified. And it was a six-month shoot I think. Mary Elizabeth Mastrantonio and I were really the only females. It was a boys’ club,” she told the mag. “And it was also the nature of the relationship, for Tony Montana (Al Pacino) to be very dismissive of my character. So I would go to sleep some nights crying.”

And getting into character was not easy.

‘How’d it happen?’ she questioned. ‘I’m very willful, you know. I’m a survivor. It’s in my nature. I don’t look so tough, but I am. And I think I was able to hide behind the tough exterior of that character, who was just sort of tuned out and tuned off, drugged.’

Of all the put downs Tony Montana directed at Elvira during the movie, nothing could have been more uncomfortable to film that him bouncing around like a goddamn jumping bean behind her.

Universal Pictures just announced it is planning a “Scarface” reboot due out in 2018, but casting has yet to be completed.