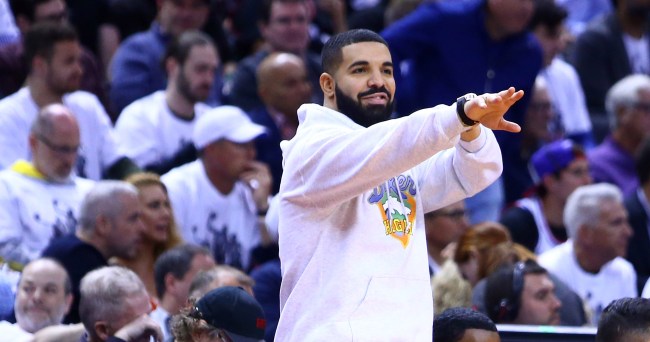 Welcome to the BroBible New Music Round-Up, where I’m all in on Tom DeLonge’s alien-related vindication. even though I think that the last we thing right now is proof that aliens exist. For more follow me on Twitter:  @ryanoconnell79

While the past decade or so haven’t been super kind to the band, I think it’s important to remember how much fun they were back in the day, when they part of the jam band revival of the early 90s.

This Week In Necessary Apologies 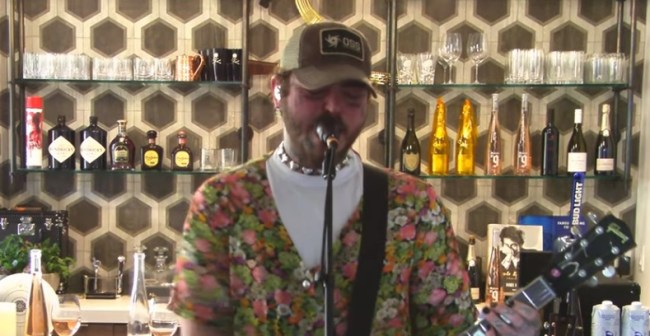 This is a new segment for the New Music Round-Up but I felt it needed to happen because I owe Post Malone an apology.

In last week’s column, I maybe had some fun and made light of the news that Post Malone was going to do a live stream concert featuring him playing nothing but Nirvana songs. In my defense, it did initially sound pretty sketchy especially when you consider that so many artists were doing similar concerts and it featured them strumming an acoustic guitar in front of their laptop.

That’s what I thought Post’s live stream would be, hence my skepticism. But I was wrong. It was actually pretty good.

Posty was joined by Blink-182’s Travis Barker on drums as well as a bassist and second guitarist and the set went deep into Nirvana’s catalog, not just playing the hits. Plus, they raised a bunch of money for the United Nations Foundation’s COVID-19 Solidarity Response Fund for WHO. 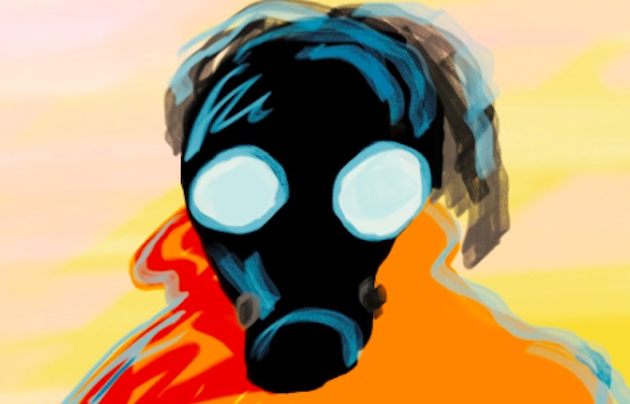 It can get confusing, but whatever. Everything is a little confusing these days.

Drake elaborated on the project on Instagram late Thursday night.

“My brothers @oliverelkhatib @ovonoel put together a lot of the songs people have been asking for (some leaks and some joints from SoundCloud and some new vibes) DARK LANE DEMO TAPES out everywhere at midnight,” Drake wrote on Instagram. “Also my 6th STUDIO ALBUM DROPPING SUMMER 2020!!! Lucky number 6 😈 soon fwd.”

If you had Drake dropping the first quarantine-produced release in your office pool, congrats. That was a smart pick.

But back in 2016 is when Car Seat Headrest last released a proper album, Teens of Denial. Since then, they’ve released the live album Commit Yourself Completely, and “a re-recording of their album Twin Fantasy.”

Four years (again, I think) later, Will Toldeo and company have released Making a Door Less Open, one of 2020s most anticipated releases based in large part on how good and promising Teens of Denial is.

The band actually recorded two versions of the new album, a more rock-centric take and an electronic version, with that one influenced by the work Toldeo and bandmate Andrew Katz had done in their electronic side project 1 Trait Danger. The final version of Making a Door Less Open is said to be the halfway point between the two versions.

This would make sense as the album has the feel of The Strokes hammering out tunes on a Casio keyboard in a dingy apartment somewhere in Brooklyn.

That’s a compliment, by the way.

You can check out Pitchfork’s review of the album here.

Last year, Local Natives released their excellent fourth album Violet Street. Now, a year later, they’ve released an album of remixes of songs from that album because it is indeed true that everything old is new again.

The remixes aren’t all brand new, with some of them having been out there for a few months now. But this is the first time they’ve been released all together in one place. One of the better remixes, a dub remix of “When Am I Gonna Lose You” by Nick Waterhouse was first released almost seven months ago.

Local Natives released a couple initial volumes of Violet Street remixes prior to the full album coming out on Friday.

For the project, the band, who have always viewed their songs “as living and breathing,” enlisted a handful of DJs and producers including Waterhouse, Moon Boots, Dot Da Genius, Joey Pecoraro and more to create new versions of the originals.

This is cool, Local Natives. Can you start working on a real new album, now? Thanks!

Khruangbin “Time (You and I)”

Khruangbin are fresh off their Texas Sun EP with soul singer Leon Bridges and earlier this week, they announced that they’re releasing a new album of their own this summer. The new album, Mordechai, comes out in June and this week the band dropped the super fun track “Time (You and I).”

I have to say, I was a little intrigued reading this anecdote from Consequence of Sound:

“The new record was inspired by an encounter bassist Laura Lee had with a near-stranger. According to a statement, a man named Mordechai invited her to go hiking with his family to a distant waterfall. As she jumped into the water at Mordechai’s encouragement, she screamed her full name — Laura Lee Ochoa — in a moment she compared to a baptism. Her heritage reclaimed, the newly-rechristened Ochoa left the waterfall overflowing with words that went on to fill hundreds of notebook pages.”

Mordechai is the group’s first new album since 2018’s Con Todo El Mundo. In 2019, they released a dub version of the album, Hasta El Cielo.

Remakes and remixes seem to be a theme this week.

Mordechai is set to come out on June 26.

Almost a decade has passed since BADBADNOTGOOD, then three young, Toronto-based, music-school drop-outs, got together with Tyler the Creator and soon started backing up acts like Frank Ocean and Ghostface Killah. Eventually, they became a four-piece, but after releasing their album IV in 2016 and touring, they took a well-deserved break.

This week they released two new songs both of which feature the band leaning more towards acid jazz than the hip-hop-inspired grooves that had connected then with Tyler back in the day. The two tracks are definitely separate pieces, but also work in tandem with one another, serving almost like two sides of a coin.

There’s been nothing to indicate that the songs will be part of a new album or a larger project. So standby on that one.

Man, I don’t know if you get down with Afrobeat or not, but if you do, then you know who Tony Allen is. Allen is largely considered one of the creators of the genre and frequently collaborated with perhaps the most well-known purveyor of Afrobeat, Fela Kuti.

“Without Tony Allen there would be no Afrobeat,” Fela Kuti famously said.

Sadly, Allen passed away in Paris on Thursday.

Allen left his native Nigeria in the 1980s, relocating to Paris where he worked as a session musician. In the past fifteen years, he spent time working with Damon Albarn of Blur and Gorillaz, playing in two bands with Albarn, The Good, The Bad and The Queen and Rocket Juice & The Moon.

Flea, who also played in Rocket Juice & the Moon, paid tribute to Allen on Instagram, calling him “one of the greatest drummers to ever walk this Earth.”

“What a wildman, with a massive, kind and free heart and the deepest one-of-a-kind groove,” Flea wrote. “Fela Kuti did not invent Afrobeat, Fela and Tony birthed it together. Without Tony Allen there is NO afrobeat.” 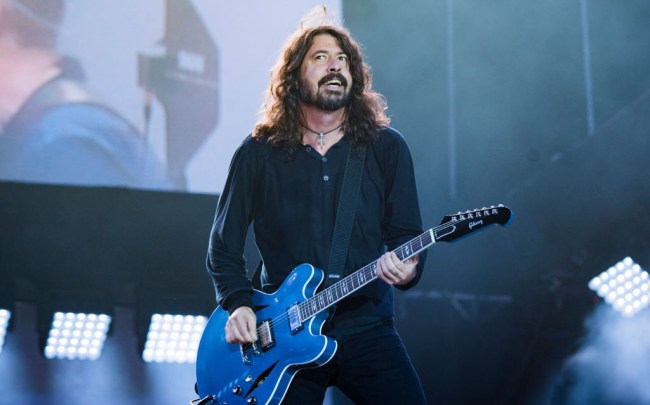 Jimmy Kimmel has been celebrating health care workers on his show recently and this week, he spent some time with New York City nurse TJ Riley. Riley has been on the frontlines and recently recovered from his own bout with the Coronavirus.

Kimmel and his crew did some research and found out that Riley is a big Foo Fighters fan. In the middle of their interview, Kimmel brought Grohl in to perform a solo version of “Everlong.”

In Case You Missed It

Metallica Is Going On “Tour” 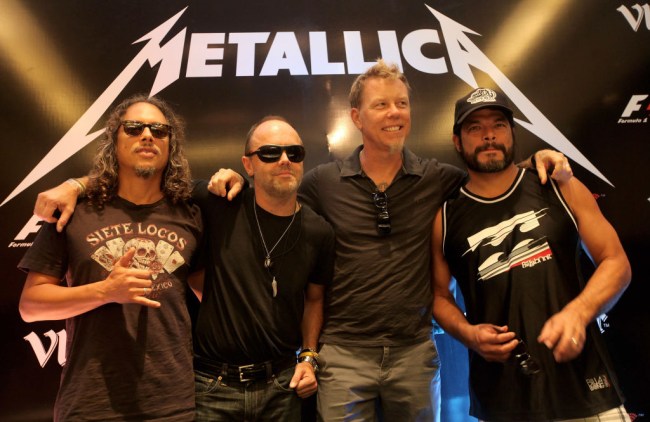 Virtually on tour, that is.

Beginning on Friday, the band’s SiriusXM channel Mandatory Metallica will air a different concert from the band’s archives every day for thirty days. Two of the shows that will be featured will be a 2013 set at New York’s Apollo Theater and a 2016 performance at New York’s Webster Hall.

Each show will also feature a DJ set from Lars Ulrich, although to be honest, I’m not sure about that one.

Metallica’s station will be free for listeners through May 30th via SiriusXM’s website.

Lollapalooza Opens Up Their Vaults

These days, it seems like everyone is opening their vaults and dumping nuggets from them onto streaming services. The latest organization to do it are the good people at Lollapalooza.

On Thursday night they kicked off their “Lolla From the Vault” series with The Strokes performance from the 2010 festival. They also uploaded Alesso’s set from 2019.

The series is looking to raise money for LiveNation’s CrewNation, which raises money for crew members who work behind the scenes at concerts and festivals, like Lollapalooza.

As of today, Lollapalooza is still scheduled to happen in Chicago later this summer, but it’s far from a guarantee, especially in light of Illinois’ governor recently expressing concerns about mass gatherings like the festival happening.

Don’t worry. This was recorded on March 4, before stay-at-home orders went into effect.

When Hall and Oates roll up on the scooter with Oates in his platform sandals, you best stand back because some real shit is about to go down. pic.twitter.com/EbSkr7Ucts