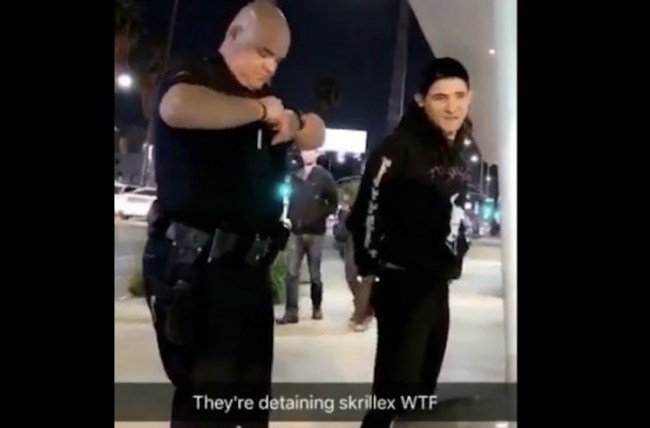 Skrillex, now there’s a name I haven’t seen in the news in quite some time. He was all over Twitter last night after a fan filmed Skrillex being handcuffed and thrown into the back of a cop car all for playing his music too loudly.

The video of Skrillex getting cuffs slapped on because he didn’t have his driver’s license on him has been retweeted several thousand times overnight, and the reactions are pretty spectacular. If you listen closely in this girl’s video you can actually hear Skrillex’s music playing in the background, which makes this bizarre clip even better.

Leave it to me to play my music "too loud" ..these new demos are 🔥 tho @elonmusk https://t.co/E6vob2j1ir

.@elonmusk ur system in the tesla model x is just too 🔥🔥🔥🔥

Just to be clear , I got pulled over for playing my music too loud … but handcuffed because I didn't have my ID on me ¯_(ツ)_/¯

@ColbyLKline @Skrillex I'll pay his bail for a soundcloud repost

@ColbyLKline @Skrillex They found out "Kill Everybody" wasn't just a song. #PurpleLamboLurkin

@ColbyLKline @Skrillex Why did I always think @Skrillex and Corey Feldman were the same person??

The entire incident played out on the noisy streets of L.A., and it ended with Skrillex being released (not arrested) to go DJ at a friend’s house. Is it wrong that my first reaction to this clip was ‘how in the fuck did TMZ not get this first?’ This all went down in L.A. and that girl could’ve gotten PAID for that clip if she just waited to send it to TMZ instead of tweeting it.