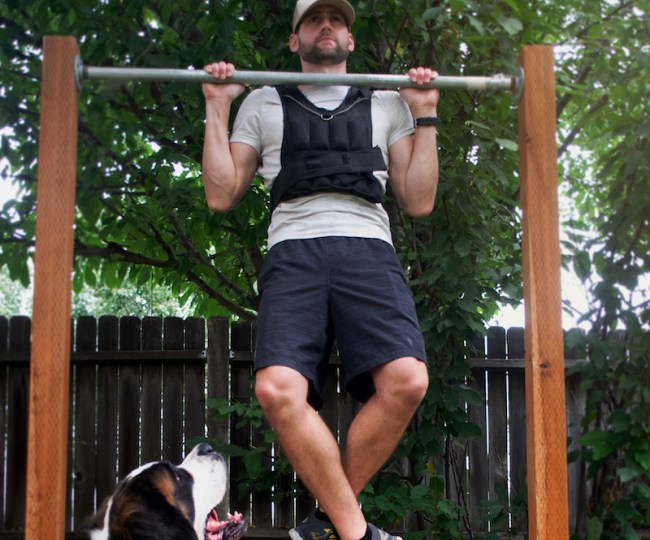 When Alex Hamilton convinced himself to attempt the 30 Murph workouts in 30 days, he knew it would be a daunting task.

“It didn’t help that anytime I mentioned it to someone, they responded something like ‘You’re going to die but if you don’t you’re going to get shredded.’ ”

“Sorry if this is a spoiler,” jokes Hamilton, “but neither really happened.”

The idea seemed even crazier to the 27-year-old from Boise, Idaho, when he did the math.

Before convincing himself to start this journey, Hamilton did extensive research on both the Murph and the success rate of people attempting the grueling month of pulling, pushing, and torturing the body.

“I’m a fairly research-driven individual, so I did what I always do when I commit to something: I spent hours reading, collecting, and skimming through the deepest parts of the internet for answers.

As expected, I’m not the first to do a Murph every day for 30 days, but the fact that anyone had done it at all gave me the confidence that I needed. Also, the size of that small group of people who have completed 30 Murphs in 30 days decreases dramatically when you add in the 20 lb weight vest which, of course, is an essential part of the Murph.”

So why would Hamilton put himself through this torture?

“In June, I ended up getting the quarantine crazies and knew one of two things were soon going to happen – I was either going to get in great shape OR I was going to get really good at binging TV shows, telling kids to get off my lawn, and mainlining donuts and cookies.”

Hamilton chose the first option. He also thought the Murphs wouldn’t be a bad idea to get into shape for the coming hunting season.

“I’m really into any outdoor adventure, especially hunting. It was actually one of the secondary drivers of me doing the challenge: to prepare for archery elk hunting season. I do a lot of solo hunting, so I always like to be in the best shape I can for that.”

To test himself physically before his 30 day Murph mayhem, Hamilton completed a 22 pull-ups for 22 days challenge.

With some serious effort and encouragement, he completed one set of 22 pull-ups with 25 pounds by day 22, but he learned a few more important things about himself that had nothing to do with exercise. Both would be crucial in completing the 30-day Murph challenge.

“Doing the pull-up challenge, I learned I could use social media to keep myself accountable – because I let everyone know about the challenge beforehand – and these self-created challenges were pushing me further than I honestly thought I could go.”

During the Murph, Hamilton decided to cut out sugar and eat 175 grams of protein a day, primarily from chicken. Not the ones featured in the video.

“This diet change which may have been harder than the Murph Challenge itself,” jokes Hamilton.

“If I could recommend one thing from those three products, it would be the Total Supplement Pack. I stopped taking them twice during the 30 days – just as a test – and felt my recovery time slow noticeably both times and my Murph times slump significantly.

Hamilton obviously feels a strong sense of accomplishment for sticking it out for the 30 days but describes the experience as “an absolute grind.”

“The first six to seven days of the Murph were by far the hardest, but after the first week, it felt a lot less like a workout, and more like a daily catch-up Zoom meeting. You really don’t want to do it, and you know it’s going to suck, but you just have to just get through it.”

His biggest improvement during the month of Murphs was to his push-ups but the worst part of each day is the squats.

“I have legs like a baby deer, and squats were and always have been my greatest weakness. I’d love to say post-challenge, I became a beast at squats, but I can confidently say that’s not the case.”

“I’ve always been pretty lean, especially from the running, so the muscle gain was a huge win. Though, the gain may not have been the workout as much as it was eating 175 grams of protein a day.”

Hamilton’s next personal challenge will be to run a marathon and then an ultra sometime in the next year.

Do you have a motivational, inspirational, or insane fitness story to tell? Let’s hear it! Shoot an email to chris [@] brobible.com and you could be featured on the website.