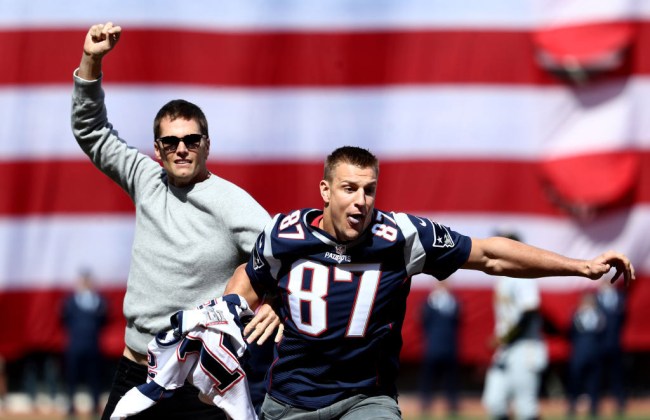 Going into the 2017-2018 NFL Season, New England Patriots all-star tight end Rob Gronkowski has gotten serious about health and nutrition. Gronk is tired of injury plagued seasons and wants to get to a point in life similar to Tom Brady where he feels great physically all the time. In order to get healthy and stay healthy, Gronk‘s enlisted the help of Tom Brady and his trainer Alex Guerrero.

Gronk’s diet for the upcoming season was crafted by Alex Guerrero, a controversial trainer who has been sued by the FTC, banned from selling various ‘snake oil‘ fitness products, but still remains a fixture at Patriots’ practices. Gronk’s been forced to put down A LOT of water anytime he slips up and drink booze or coffee, and he even has Tom Brady cooking him one of Tom’s favorite plant-based meals each day.

Gronkowski said of his new plan: “I wanted to find a way to make me feel good all the time and not worry. Coming here has definitely put me in that right direction … I’m getting massage therapy, I’m learning about hydration, I’m learning about nutrition. It’s helping me expand my game.”
Brady has even been involved, according to Guregian. Once a day, Brady cooks Gronkowski one of his favorite plant-based meals.
“Tom’s my chef,” Gronkowski said. “I told him I’m only eating them if you have them ready for me. And he said, ‘Deal.'”
However, Gronkowski hasn’t fully bought in. He isn’t eating avocado ice cream yet, and there is reportedly a protocol if he breaks the rules and has off-limit beverages like alcohol or coffee. According to Guregian, for every drink Gronkowski consumes that’s not on the diet plan, he has to have three glasses of water to make up for it. (via)

According to B.I., Gronk’s already 12 weeks into his new diet program and he says that he’s feeling the positive effects. Gronk says he feels looser, ‘more pliable’, and that his mobility has increased a ton going into the upcoming NFL season. Which, I think we can all agree, spells doom for every team in the NFL not based out of New England.

A healthy Gronk all season long all but cements the Patriots’ return to the Super Bowl next season, so it’ll be interesting to see if his body holds up under the new diet. (h/t Business Insider)