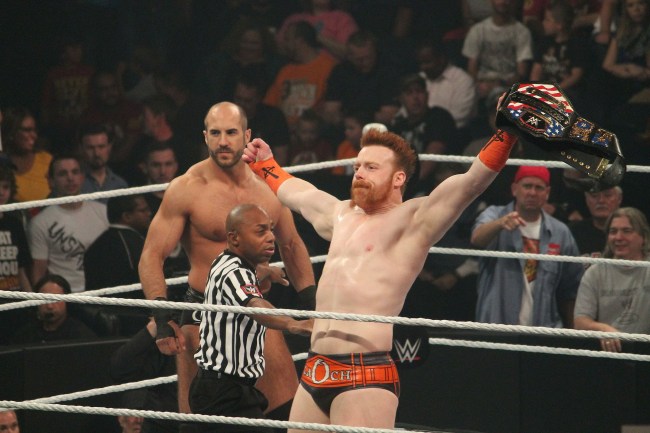 But when they’re out of action with an injury, retired like Edge, or only part-time performers like The Big Show, it’s easy to slip into bad habits.

WWE star Sheamus has always been in good shape. Better than the average bloke walking the streets.

A while back, the Celtic Warrior was a little bit pudgier than usual, and it took a slight ribbing from his boss to get him back into shape.

Sheamus recalled the moment on Edge and Christian’s “Pod of Awesomeness” show.

“At one stage, I was kind of thinking, ‘man, I should bulk up!’ Like, I was seeing a lot of guys in there and ‘how do I get back?’ At one time, I was pretty much one of the biggest guys in there, like, not ‘I’m a giant-wise,’ but I was, like, size-wise, bulk-wise, and I was like, ‘yeah, I should bulk up again.’

And I kind of bulked up. I was seeing, like, Brock [Lesnar] and Braun [Strowman] and all these lads, and I’m thinking, it just got to a point where I didn’t look good, mate.

Just like I put on a lot of weight, but I was carrying a lot of body fat and I just kind of lost control of where I was at.”

Sheamus recalled, “it also started because I came back from holidays in Ireland and me and Cesaro were walking by Vince and Vince goes, ‘hey Sheamus!’ I said, ‘yeah?’ He goes, ‘enjoyed the holidays, huh?’ and he was looking at me in the gut and I was like, ‘okay, that’s it.

That’s it. I need to do something about it.’ But that was the change in gear and Cesaro will tell you as well.

Cesaro knew right away when that comment was made. I just put too much weight on, man.”

Even though Sheamus has been out of action since April with a concussion, the former world’s champion is now in the best shape of his life and chronicles the entire process on Instagram and in his Celtic Warrior Workout videos on YouTube.

“I feel so much better,” Sheamus told Edge and Christian. “Like, it’s all a myth where you think bigger is better, but it’s not, especially when we’re in the ring. The leaner we are, the bigger you look, and the better you look and that [has] definitely been evidenced in the last few months I was in the ring.”