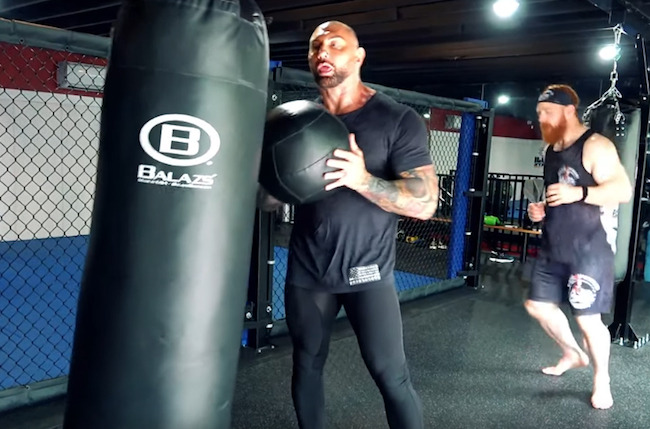 I’ve been turning people onto the awesomeness of the Celtic Warrior Workout YouTube channel for quite some time.

Created by WWE star Sheamus, the channel isn’t just a place to find interviews with professional wrestlers and MMA stars. The channel is filled with intense workout ides.

This week, part-time WWE star and full-time A-list celeb, Dave “The Animal” Bautista and the Celtic Warrior “took it easy” with an MMA-inspired cardio routine that would gas any Marvel hero.

Bautista is slightly hobbled, as Sheamus explains in his comments, so the workout was aimed to slowly rehab the movie star.

“I took a ten hour drive from Nashville to Tampa to hook-up with The Animal who was on his first day back in the gym, getting-back into MMA with his coach Josh Rafferty.

So the theme of our workout was Easing Back To The Gym After A Break which is a very important part of training no matter what the discipline.

The temptation to crush-it on your first day back at the gym after a prolonged break is the worst game plan ever.

You gotta ease back into it, especially as you get older.”

The duo talks about wrestling, acting, the old days, and get in a workout.

I know this routine is aimed at recovery, but those medicine ball punching bag exercises look exhausting.

If you’re wondering when Sheamus got so yoked – he’s always been big, but he’s now shredded AF – he explained the transformation on a recent episode of WWE’s “Ride Along.”