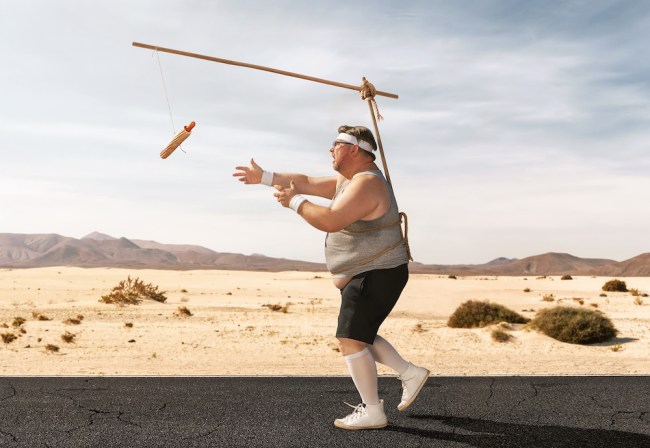 Here’s how it usually works for me – I’ll have a great run and burn over 1,000 calories.

I’ll have these thoughts while shoving food – not always junk food – into my mouth.

I’m friends with more than a few runners who put in extra miles with the sole purpose of “being able to eat whatever they want.”

Unfortunately, our bodies are machines. And eating poorly makes the next workout or run even harder. It also encourages bad habits that can’t be erased by the extra mile or a few more reps.

“I notice when I overeat junk food the day before that my run is sluggish the next day,” admits Julie Hartenbach. “My legs just won’t have the pop I need in them.”

A part-time runner and full-time program analyst and mom, Julie’s main weaknesses are any sorts of desserts, cookie, candy, donut.

She’s admittedly an “eat whatever I want because I run” type of runner.

“I would say yes to it all. The greasy Five Guys type of cheeseburger is also my after-race meal of choice. Finally, wine is also a treat of mine that I indulge in too often.”

Her habits didn’t change until she attempted to reach an Olympic Trails qualifying time.

“This idea started as ‘I just want to break 3 hours in the marathon’ to smashing that goal and realizing I was just 3.5 minutes off the Trails time.”

When she first started training to break the 3 hours goal, she ate whatever she wanted.

All of the bad eating caught up with her – unfortunately in the middle of a race.

“I bonked HARD at mile sixteen of the NYC marathon (my goal race to break 3) that I realized my nutrition game plan was woefully inadequate. Changing that up allowed me to smash the 3-hour mark in the next race, just 10 weeks later.”

“The reasons why runners plateau when they are training and carb-loading on empty calories, which are foods that provide you with simple carbohydrates or pure sugar, but no other vital nutrients,” explains Katy Tenner, a registered dietitian, and nutritionist.

“This happens when runners are misled into thinking that they can ‘eat whatever they want’ because they are running.”

It’s easy to fall into this trap. Head over to any men’s fitness website and read about the crazy diets of high-level athletes.

Unfortunately, not many among us are high-level athletes, burning an insane number of calories each second.

I asked Katy for some of the dos and don’ts of eating and how to abstain from stuffing food in my face after long runs.

1) Prior to running, don’t take carb-loading too seriously and focus on the other macronutrients like protein or fat, which help you feel full and provide essential nutrients.

2) Get enough protein into your post-run meals. A runner should consume an average of 30g of complete protein within 1 hour of completing a workout (aka the metabolic window).

3) Don’t try and cut back on calories too much. This leads to binging.

4) As far as junk food, instead of eating a bag of Skittles or handfuls of potato chips (which provide no other nutrients than carbs), try having dried fruit, whole-wheat pasta, or sweet potato, which are full of vitamins and minerals as well as carbs.

“Finding the appropriate dietary balance is essential, especially for runners. Eating whatever you want all day may seem okay because of all those calories being burned from running, but without the right foods, your body won’t be able to build/repair properly, and you may end up gaining weight.

Having a cheat meal, or a cheat day is a more acceptable indulgence for runners. These require one to restrict daily calorie intake and maintain a healthy diet so that after a run, they are able to afford the extra calories.

Or, having a ‘cheat day’ where eating foods that are not normally included in their diet. An acceptable cheat day is normally once every week or two. Remember, calorie intake needs to be less than calorie output in order to lose weight.”

Tenner also shared this tip about sleep, which I’m sure most people aren’t getting enough of with everything going on in the world right now.

“Make sure you’re getting enough sleep. A physically traumatized body or an overtired mind will not be able to train at a high intensity. Lack of sleep causes the body to produce more of the hunger hormone, ghrelin, which causes the body to crave sugar, and produce high levels of the stress hormone, cortisol, which stores those sugars as fat.”

One final tip, one that I find works best in my life, is to not buy the foods that tempt me the most. If they’re not in the house, they’re impossible to eat.

If I buy stuff for the kids, I’ve been known to lock it away in places I can’t easily get to in.

It might sound extreme, but not as severe as eating a sleeve of Oreos.