Custom 1,200-Round Nerf Blaster Is So Devastating It Requires A Hopper And Tripod 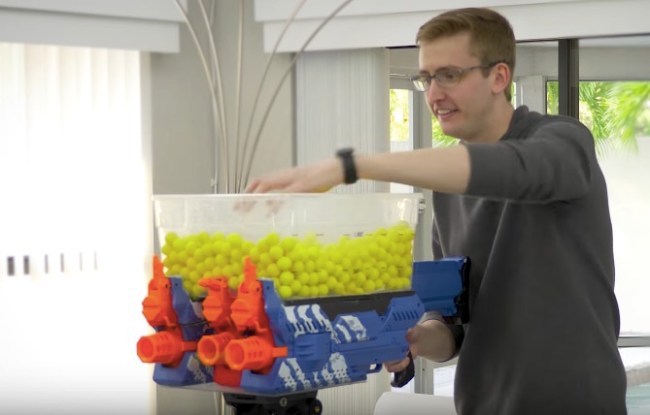 Gone are the days of having a Nerf battle where you can peel off six shots before having to spend the next 5 minutes finding those foam darts and reloading. The Nerf guns that are available to kids these days are on a whole different planet from the Nerf guns we had when we were kids.

I look at this devastatingly custom 3-in-1 Nerf Rival Nemesis blaster and can’t help but think that this is the Nerf equivalent of aliens landing on earth with guns that are so technologically superior to what the human race has that our population is wiped out in minutes. I mean, just imagine popping around the corner to fire off a Nerd ball at your older brother to see him standing there with this thing set up on a tripod with a hopper on top to feed the 1,200 rounds…How long would you last before tapping out?

Here’s how it all came together, via Sploid:

As far as Nerf mods go, Frank Cooper’s Triple Nemesis is relatively simple. The two side blasters have their battery compartments trimmed off, as Cooper replaced the 18 D-sized batteries you’d normally need (six for each Nemesis) with a couple of larger-capacity rechargeable power cells. Other than a little wiring, lots of glue and zip ties help bring the whole creation together, ensuring no one will ever want to have a fun Nerf battle with Cooper ever again. (via)

This mod comes from YouTuber Coop772, and shout out to Gizmodo’s Sploid for sharing this video.