The All-New 2019 Chevy Blazer On The Pacific Coast Highway: An Ideal Ride For The Road Trip To Big Sur 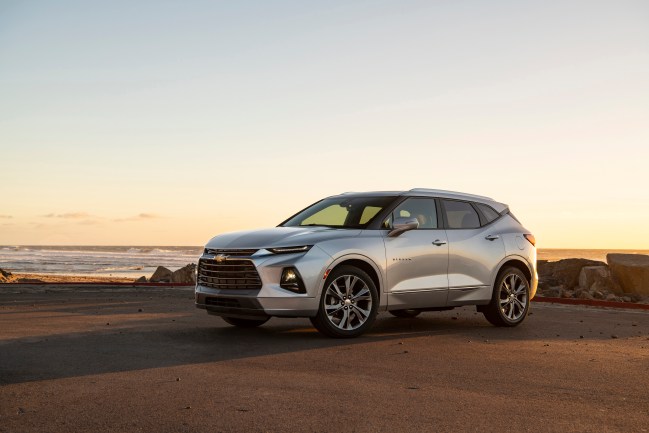 Two hundred miles into this haul from LA to Big Sur, it suddenly hits me. The Chevy Blazer is actually breathing life into the driving experience.

Gone is the fatigue that sets in after the first two hours. Gone is the tension that often arises as companions scramble to agree on the next song on the playlist. Even gone is the need to stop for gas because we just passed San Luis Obispo and I’ve still got more than half a tank to burn.

It’s time to open up this 2019 Chevy Blazer on the narrow straightaway that extends all the way past San Simeon, before the terrain drastically changes into a microclimate of tight-winding turns, gnarly steeps, sharp drops, and some of the most beautiful vistas known to man. 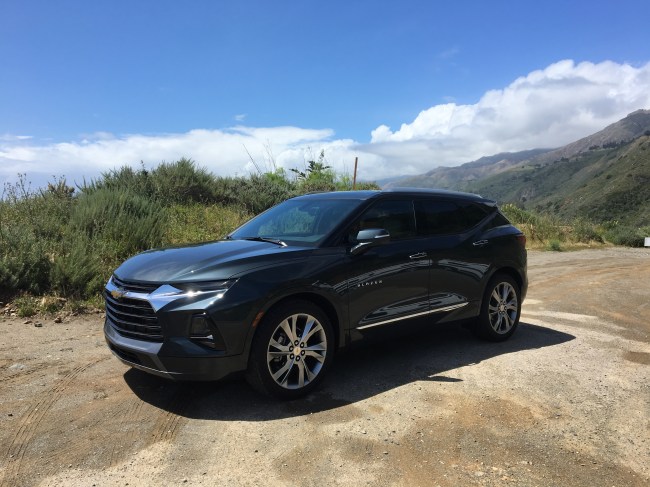 I’ve done the drive up and down the Pacific Coast Highway more than a handful of times. I’ve driven that stretch in a number of rental cars and a few vehicles of my own, American made, some Japanese and European imports, even a couple loaners: sedans, coupes, SUVs, but never a convertible. I’ve also never driven up the California coastline in a vehicle quite like the Chevy Blazer, but perhaps that’s because the model was discontinued in 2005 as Chevrolet shifted its focus to bigger and bulkier trucks like the Suburban and Tahoe, along with crossovers like the Equinox and the Traverse.

Unlike all those other models, however, the Chevy Blazer carries a unique appeal for motorists in our mid-to-late thirties. Back when many of us first started driving, vehicles like the Blazer, which is now classified as a crossover due to its easy to change all-wheel drive and front wheel options, were hot-ticket items in the late nineties, back when the SUV craze first started popping off. I’m pretty sure that was due to some federal tax loophole on trucks used for business purposes, but the Blazer, along with its GMC Jimmy doppelganger, had a smooth and stylish look with its slightly rounded rear.

The Blazer was a truck that said “I’m strong and in control, but definitely not overcompensating for anything,” and was one of the most beloved SUVs by mountain trekkers and outdoorsy types. Tough enough for hunters on an expedition, it was practical enough for family trips and safe enough for new drivers, so it came as a bit of surprise when Chevy ceased production in 2005.

Now back for the first time in 14 years, the Blazer is a welcome addition to road, and just before the sleepy and charming coastal village of Cambria, famous for its Moonstone Beach, which hides beneath the fog in plain sight, I decide to veer off for a bit of a detour, breaking off of Highway One for a cruise up Route 46 into the Paso Robles wine country.

While I’m familiar with almost every curve and turn along “the one,” this is my maiden foray on the 46. It’s only appropriate to follow Chevy’s Find New Roads motto while opening up the engine on a brand new vehicle. And boy can this Blazer — it’s a Blazer Premiere I should add, since there are a few classifications within the Blazer family — fly.

I won’t go as far endorsing breaking the speed limit, but I’ll simply say that the Blazer handles well at high speeds. The 20-inch wheels offer such a smooth ride that it’s tough to believe how fast the car is actually going, especially for as light as I press the accelerator.

Up and down the hills, which are in stark contrast to the rises we’ll eventually hit in Big Sur, the drive into wine country is something out of a pastoral painting, perhaps best described in the pages of a John Steinbeck novel. Earthen tones: beiges, yellows, even faded oranges; break at mid horizon as the color palette shifts to shades of green from the sprawling oak trees and endless rows of wine vines, perfectly planted on every possible stretch of land. Excited by new territory conquered, I give the engine a bit more gas and the Blazer responds with ease: I guess that’s what a 3.6-liter V6 engine feels like delivering 308 horses and 270 pound-feet of torque.

For this 2019 relaunch, Chevy reimagined the original design and gave the Blazer a new modern look. Wider than the Blazer of my youth, this updated version has sharper contours and edges than its smoother, rounder predecessor, along with sleek chrome accents and a sturdy-yet-elegant horizontal grill. Still with its two rows and five-passenger seating, the Blazer doesn’t get caught up in the bigger-is-better game. It has plenty of cabin and cargo space, reaching up to 64.2 cubic feet if you need to fold down the back seats. There’s also the nifty Chevy-first cargo management system with a rail system and cargo fence, which is a perfect way to prevent my luggage, and a handful of bottles of Turley Juvenile Zinfandel I just picked up on this brief detour into Templeton, from clanging around on every twist and turn in the road. 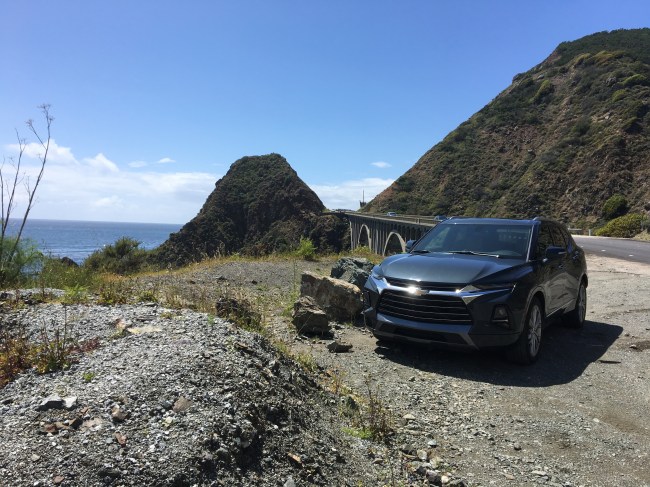 It’s a true luxury to tack an additional 60 miles, and a couple of hours, onto any road trip, just on a whim, but hotel check-in isn’t until 3 p.m. and early morning traffic on the 101 was rather sparse, so it’s been an exceptional detour. The added mileage has also provided extra time to fiddle around with the Blazer’s technological components and the 8-inch diagonal color touchscreen, which are a huge upgrade from the model of yesteryear, before BlueTooth was even a word in the lexicon.

Hooking my iPhone up to the Apple CarPlay prior to departure, I’m armed with road tunes galore, not only in my ample iTunes library (R.I.P. iTunes), but also, thanks to the built-in Wi-Fi hotspot, I can access Apple Music, Spotify, and even Pandora without burning through my data plan. None of that will apply once we hit Big Sur, however, as it’s one of the true off-the-grid locations in America, where there is no WiFi, and that’s a good thing.

Back on Highway One, I make a sharp right and continue north, stopping in Cambria to refuel the 21-gallon tank that gets 26 highway miles per gallon in the front wheel drive setting. I even take a moment to collect a few green and translucent moonstones on the very beach named after the shiny gems that hide among millions of smooth and colorful rocks. Then it’s north past San Simeon, where thousands of tourists stop at the marvelous and spectacular Hearst Castle, daily.

The Hearst Castle truly is one of California’s most fascinating attractions, but I’ve been there before, several times in fact, and it holds no opportunity to test the Blazer further. And since this road trip is designed as a respite from the grind of Los Angeles, I need to push this engine as much as possible to make up for the daily crawl through rush hour traffic on Interstate-5, which is arduous, stressful, and even painful. 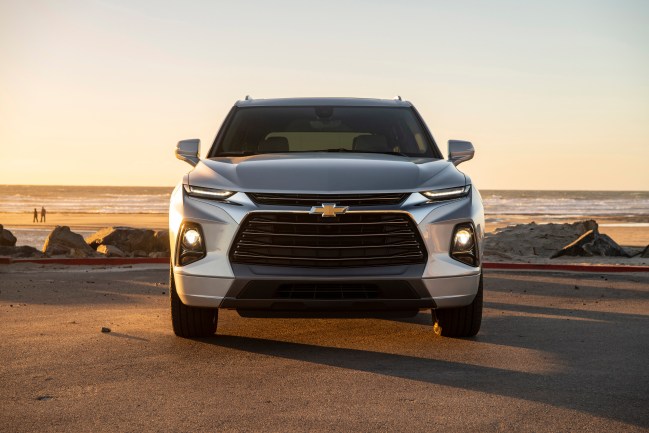 And much like the road between Morro Bay and Paso Robles, the coastal stretch from San Simeon to Ragged Point not only provides a breathtaking view, but also an opportunity to open the Blazer up one more time. Now past Piedras Blancas State Marine Reserve and approaching Ragged Point, the gateway to Big Sur, the microclimate changes once again, along with the roads, which transition from straightaways to the winding steeps of the most famous part of the California coastline.

Once in Big Sur, this communication hits its no signal phase, but not without saying that the all-new 2019 Chevy Blazer is all the car anyone really ever needs. It feels like a truck, but handles like a sedan. It whips around at impressive top speeds, but can conquer a slow uphill hall. There’s plenty of pickup in its beefy V6 engine, and the Blazer takes even the sharpest turns with the smoothest of glides. It’s luxurious on the inside and rugged on the exterior, and brings back the early years of the SUV craze.