Taking The 2019 Chevy Silverado Z71 Into The Sierra Nevadas: Ripping Through Lake Tahoe And Squaw Valley

#trucks
BroBible may earn a commission if you buy a product or service via links in this article.
by Dan ShapiroAugust 24, 2019 2:03 am 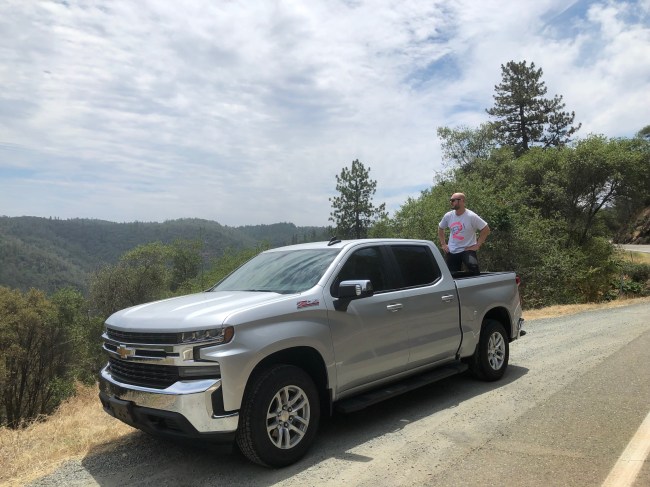 It didn’t take long for me to fall for the Chevy Silverado. It happened before I even set out on this Independence Day jaunt up Interstate-5 to Lake Tahoe.

Instantly smitten by the Silverado’s sheer size, spaciousness and sleek contours, it was only 400 miles into the trek, right around Auburn, that my initial fancy turned into a full-on head-over-heels fascination. That was right around the time I switched on the four-wheel-drive function to tackle the steep climb into the Sierra Nevada mountains, the very type of terrain the Silverado’s Z71 engine was made to conquer.

Setting off from Los Angeles in the heat of heavy holiday traffic, the first two hours of this 1,100-mile roundtrip driving odyssey were perhaps the most brutal and taxing I can ever recall, inching north on the 405 freeway in 90-degree heat. 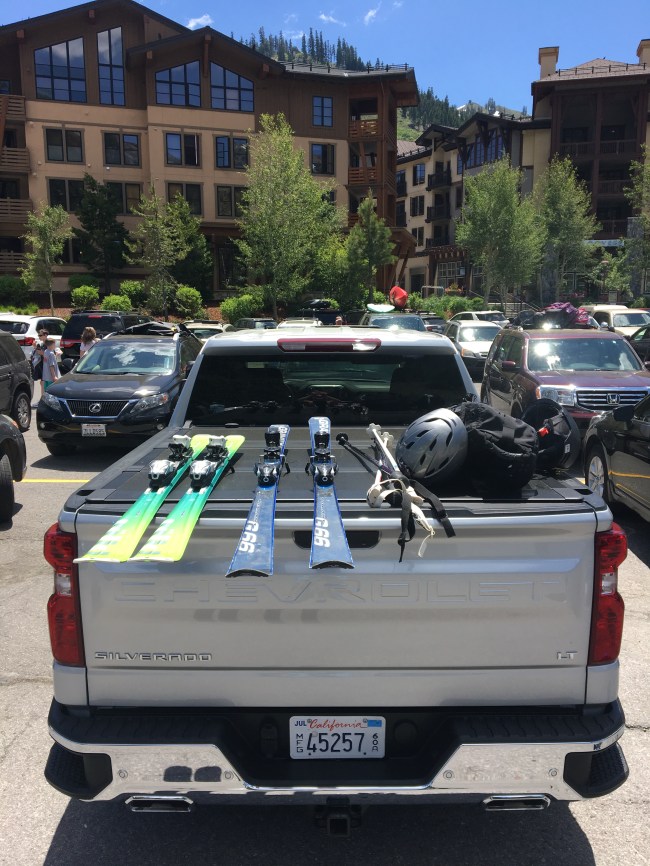 The slow start allowed some time to better acquaint myself with the luxury features of the Silverado 4WD LT Crew, which include a sleek dashboard, Apple Car Play on the touchscreen console, and dual climate controls. The bells and whistles quickly transformed the most painstaking of traffic jams into a slow-rolling party on wheels.

With the traffic now in the rearview mirror, it was finally time to open the Silverado up and start pushing the limits of this 5.3-liter V8 engine on the ascent up the Grapevine. The Z71 responded with ease, cranking 355 horses and 383 pound-feet of torque as I started to hit elevation, and top speed, passing every other car and truck on the highway.

Cruising along for the next 300 miles, the Silverado LT Crew impressed with its fuel economy. Sure, this beast can still guzzle a tank of unleaded, but averaged closer to 25 mpg, better than the advertised 22 mpg. It was probably the high speeds and rear winds that improved the efficiency, but the three-fold truck bed cover definitely helped a bit.

And with that it was off to Sacramento for a quick refuel.

Stopping just outside California’s capital city after merging onto I-80 east towards Tahoe, I made the switch from two wheel drive to 4WD with the push of a button. And while the difference went undetected at first, once the incline started to become steeper at the gateway of the Sierras, it became clear what the Silverado Z71 package can do.

Having made this drive before in a mid-size sedan, it’s a completely different experience in such a mighty pickup. The Chevy Silverado 4WD LT Crew quickly distinguished itself as the real king of the road, outgunning every other truck, SUV, and crossover in the mountains. The experience was further enhanced by the sheer notion that I was driving such an iconic American machine on the Fourth of July with a full on “mine is bigger than yours” attitude. Seriously, what could be more patriotic? 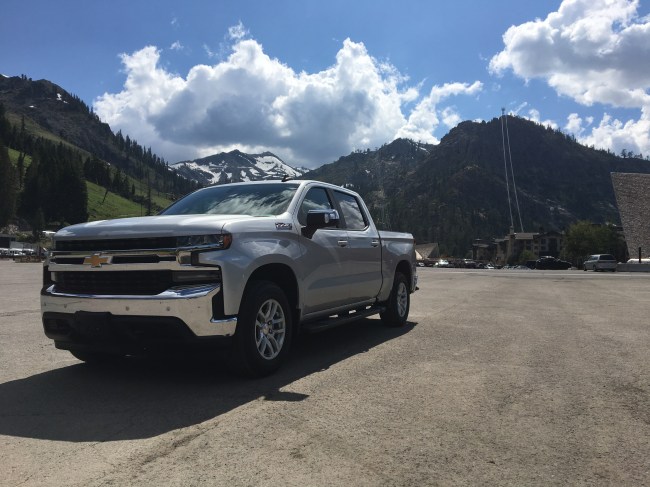 Now, I don’t generally condone big trucks in the city. It’s like riding a motocross bike on the highway — the intention of the vehicle is never fully realized in an unnatural climate. However, up in the Sierra Nevada, pickups, and big trucks in general, are a dream, tackling the terrain without any struggle from the engine. In this respect, there couldn’t be a vehicle better suited to handle the rigors of mountain driving than the Silverado Z71.

It also didn’t hurt that the cab was spacious enough not only for all my ski gear: two sets of planks, boots, and poles; and a few suitcases full of vintage ski apparel, but also for a couple of mountain bikes that I picked up in Tahoe City.

See, while I was happy to make the early morning drive over to Squaw Valley for a few summer skiing runs at the resort’s Freedom Fest, Lake Tahoe becomes rather crowded on summer afternoons, as cars sit bumper to bumper on Route 89 as it wraps around the lake from California to Nevada. 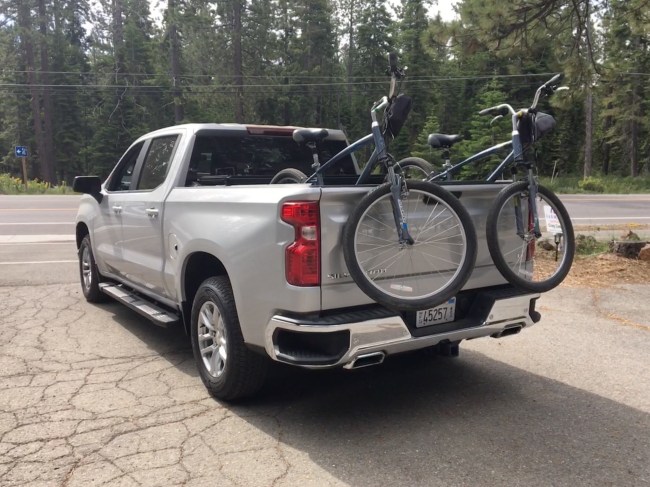 Having spent hours in traffic at the start of the trip, I opt for the comfort of a bike as I approach the lake shore. It’s a humane and pleasant way to spend the afternoon, but after a few relaxing days on the beaches and abandoned docks of Tahoe, it’s once again time to fire up the Silverado for the return trip to Los Angeles, although on the way back, I opt for a massive detour through the rolling hills of Amador County, one of California’s lesser known wine countries.

With steep ascents making way for big drops and declines, route 49 bisects the Auburn State Recreation Area, through the town of Cool, and eventually Plymouth. The detour is just one last chance to feel the power and control of the Silverado Z71’s 4WD feature, as it masterfully takes every hill and every turn. From there I return the truck to its two-wheel-drive setting for the highway cruise back to LA.

Of course, what’s a roadtrip without a few nerves, which are tested right as we approach the famous Harris Ranch, California’s largest cattle farm. Unbeknownst to me, I nearly emptied the truck’s 21-gallon fuel tank, pulling into station with the meter on empty. 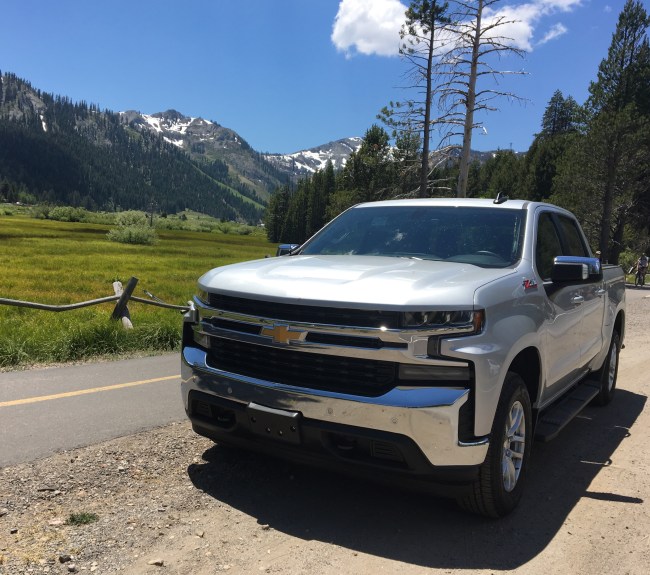 The near crisis could have easily been avoided as the Silverado 4WD LT Crew has a multi-function digital display that tracks stats like trip mileage, fuel economy, tire pressure, and fuel range, but I was just too deep in the zone, jamming down the highway on this long haul. Besides, there was a silver lining, as I was able to pick up a mean brisket and cheddar sandwich at the Harris Ranch’s BBQ Express location, which may very well be the best roadside fast food in the entire state.

With the fuel tank now full, it’s back to LA, posthaste, where I return the Silverado, setting the king of the road free. And while our paths will likely never cross in the urban concrete jungle, I’m sure that we will meet again next time I’m looking for a power and force that can stand up to the most challenging mountain terrain.