#gear reviews
BroBible may earn a commission if you buy a product or service via links in this article.
by Marcus AmickMarch 16, 2018 10:44 am 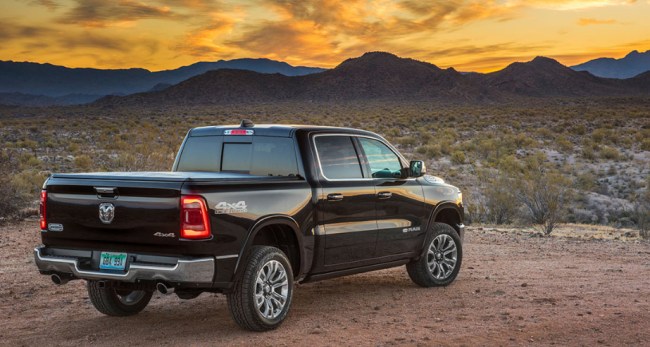 There’s arguably no vehicle more coveted or respected than the pickup when it comes to the idea of all-out capability.

After all, the traditional truck is one of the few rides that man has come to depend on for work as well as play, which has continued to shape the appeal of the vehicle over the more than 100-plus year history of the pickup.

For Ram, it’s always been a concept approached with the idea of making a bolder statement in the segment with the 1500, long before 2009 when the truck ditched the Dodge nameplate to solidify its own identity in the competitive world of pickups.

Since freeing itself from the reigns of Dodge, the Ram has undergone a few notable enhancements, but nothing as significant as the new 2019 model, which BroBible recently had a chance to experience first-hand in the wilds of Arizona.

For the most part, the pickup’s basic exterior design has been kept intact, just recrafted in a more muscular body, accented with a slew of new details like a more protruding hood. However, the Ram’s longstanding crosshairs on the front grille have been swapped out for a more cohesive look, which slightly tempers the truck’s “big rig” personality a bit.

Though, in actuality, the Ram is bigger than ever, boasting a wider and longer body than the 2018 model. However, what impresses you most about the new model is how small and nimble it feels on the road. It’s the kind of thing that might not seem like a big deal when hauling a trailer on straightaway across a wide-open plain, but when driving the full-size pickup on a twisty road, it’s a highly valued attribute.

The Ram team credits the truck’s much improved ride and handling to a number of factors, including an all-new shock system, a class-exclusive air suspension and a new frame that features 98 percent high-strength steel that makes it one of the most durable and strongest in the game.

Powered by either a 305-horsepower V6 or a 395-horsepower V8 with a massive 410 lb-ft of torque, the Ram also managed to shed 225 pounds to help improve its overall performance capability as a more fuel-efficient vehicle. Even more impressive, the pickup managed to pull off a smoother riding truck, all while beefing up the capability of the pickup.

Touted as the strongest Ram 1500 ever, the new 2019 model now has a maximum payload of 2,300 pounds and maximum trailer tow to 12,750 pounds. The new 2019 Ram Rebel model cranks up the appeal of the pickup’s capabilities on an entirely different level, with the addition of a special off-road package that includes skid plate protection, 33-inch tires and massive brake rotors.

Inside, the new Ram 1500 takes a much more luxurious approach to building on its legacy, as a go-to ride for hauling some of man’s most prized possessions, whether its family members, boats or both.

Not only does the new model have a lot more interior space than the previous model, but it has also been crafted with more luxury appointments, which really shines through in the Laramie model and the Laramie Longhorn that’s draped in details like a hand-wrapped, 100 percent full-grain leather-wrapped dashboard and a new alligator skin embossed surface. The 2019 Ram lineup also is equipped with slide reclining seats in the second row, part of a new design strategy aimed at ensuring that some of those coveted driver comfort features are extended to rear passengers as well.

The 2019 Ram’s most drool-worthy interior element, however, is a new 12-inch reconfigurable touchscreen display with split-screen capability, powered by a new state-of-the-art Uconnect system. Other tech features include a 360-degree surround view camera, 4G Wi-Fi hotspot capability and a parallel/perpendicular park assist system that enables the truck to back itself into a parking spot.

The 2019 Ram, which starts around $33,000, also boast the most powerful factory-installed audio setup to be made available in a pickup, a Harman Kardon system that features 19 speakers, a 900-watt surround sound amplifier and a 10-inch subwoofer.

However, nothing quite sells you on the new Ram 1500 like barreling a Laramie model across a stretch of rocky Arizona desert, and still being able to revel in the peace and tranquility of the truck’s surreal cockpit, because of how well the pickup is built. 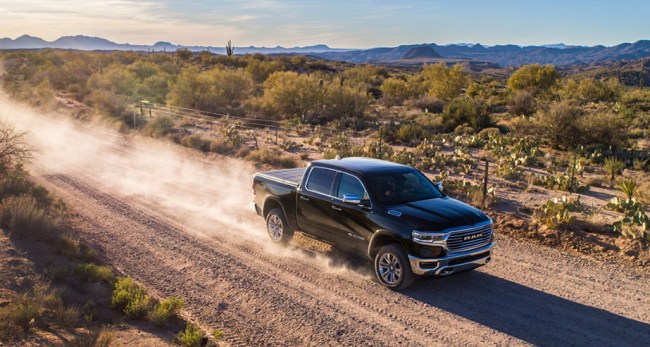