2020 Cadillac XT5 Sport Review: Why the XT5 Sport Will Change Perceptions About Crossovers 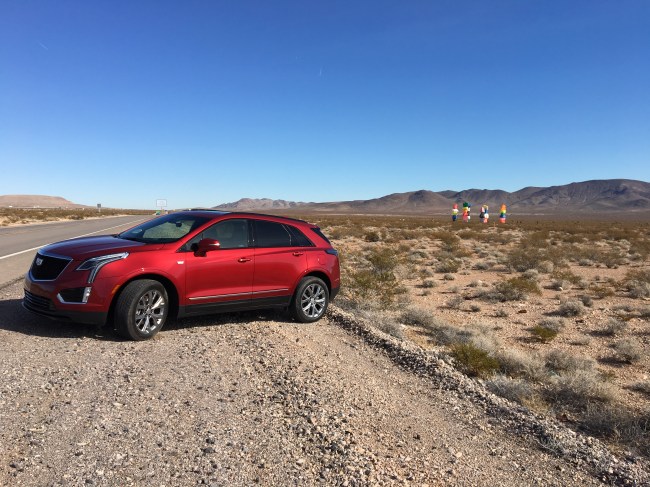 It was right outside Las Vegas, a few miles south of the towering Seven Magic Mountains installation on Route 91, that it became apparent that the Cadillac XT5 Sport was the right choice for the trip.

Parked on the side of the road with my hazards lights on, a state trooper approached from the driver’s side, asking me to roll down the window. “License and registration,” he requested.

Handing him the necessary paperwork, I was even keeled, nearly apologetic. I knew the officer had me in his grips, able to slam the proverbial book at my driving infraction. Speeding is a victimless crime, I thought. It’s also one hell of a collections racket, and I was prepared for the worst: a fine, points on my license at the most.

Honestly, had I been in any other vehicle, I’m sure the Nevada sheriff would’ve enforced the extent of the law, whatever it may be for going 70 in a 55. However, sitting in the cozy and spacious cabin of the Cadillac XT5 Sport, it quickly dawned on me that how I perceived the incident in real time was quite different than what the police officer was seeing at that very moment.

The evidence came minutes later, when he returned my documents and let me go with a warning. “Watch your speed,” he emphasized. “And don’t get in too much trouble in Vegas.”

Never before, in 21 years of driving, have I ever been let off with a warning. Rugged and aggressive looking men don’t get off this easy, scott free, on the outskirts of Sin City. This is exactly where John Law slams down the gavel, locks the door, and throws away the key. But on this day, something was different, the stars were aligned in my favor.

Then, as I drove off, I realized. This wasn’t Lady Luck or Caishen, the Chinese god of money and prosperity. It was the Cadillac XT5 Sport, a vehicle that screams upstanding citizen and responsible adult. What a cover.

Now, this is not a story about speeding, getting off the hook, or evading the law. It’s a story about perceptions, change, and growth, and the Cadillac XT5 Sport is the real protagonist, even though I was behind the wheel.

Backpedaling a few hundred miles to Los Angeles, this story begins just outside Skid Row, in the financial district, where the Cadillac XT5 Sport presented its first mind altering challenge. It came in the form of the rearview mirror, which, in fact, wasn’t a mirror at all, but rather a digital camera facing out the back of the vehicle.
Trying to navigate heavy traffic en route to the highway, my eyes were forced to do a double take in the mirror.

Was this car intentionally deceiving me? What exactly was I looking at? Would I be forced to deal with this view for the next four hours? If so, I’m not sure I could really handle the digital imprint in place of the mirror’s reflection.

Fortunately, mankind likes to touch things and press buttons with reckless abandon, without really knowing function or consequence. Intuition led me to a lever behind the mirror, and with a quick flip of the index finger, the camera view changed to standard analog. Just like that, the driving experience improved tenfold. 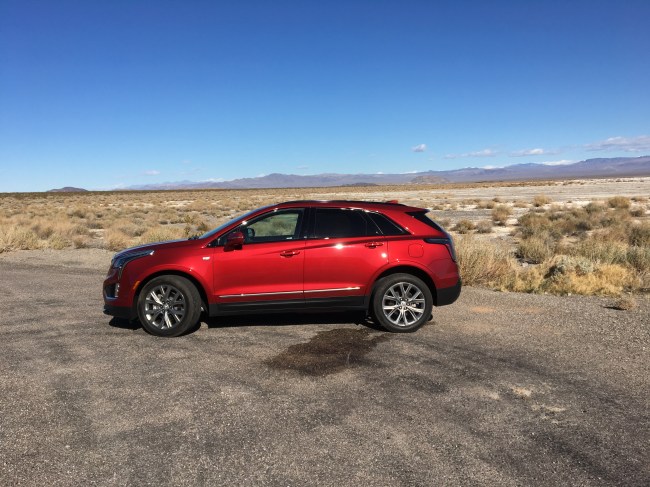 Finally able to see, it was on to the 110, to the 10, to the 15. You know, the way Californians like to abbreviate roads and highway names.

Who am I kidding? I hooked my iPhone up to the touch screen dash panel and the Apple CarPlay function and DJ’d a chill set of anti-road rage tunes: artists like The Beatles, Radiohead, Arcade Fire, the Black Angels, Brian Eno, and Broncho.

Creeping and crawling past towns like El Monte, West Covina, Covina, Pomona, Ontario and Rancho Cucamonga, things really opened up at the El Cajon Pass, the gateway to the Mojave Desert, 3,700 feet above sea level.

Gunning the accelerator, the Cadillac XT5 Sport climbed the altitude with the ease of a much larger vehicle and the speed of a coupe. The 271 pound-feet of torque and 310 horsepower were pushed, but never to their limits, and the ascension up El Cajon made me wonder what it would take to truly max out this beast disguised in a soccer mom exterior.

With the playlist now shifting to a more desert-appropriate selection: Glen Campbell, Queens of the Stone Age, Ty Segall, Black Sabbath, and Tame Impala; it was on to Barstow, and beyond. You know, where things start getting weird. 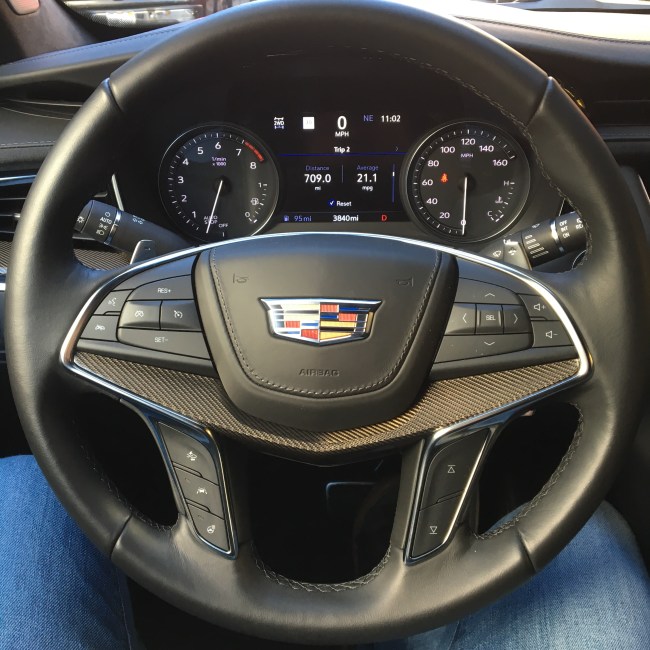 Now past Barstow an into the thick of the desert stretch that hits Yermo, Zzyzx, and Baker, the Cadillac XT5 Sport really started to unveil its true colors, all while working at a 25 miles per gallon clip. It’s rather efficient for a vehicle of its size on the highway, and the nine-speed automatic transmission seamlessly shifted from gear to gear as I passed nearly every car and truck in site.

Cruising down the open road, the Cadillac XT5 Sport almost felt more like a spaceship than a luxury crossover. The cabin, with its slick inner contours and sleek black leather interior resembled a roomy and posh cockpit, and the ride remained smooth as fresh asphalt, even at high speed.

Of course, this anecdote is in no way meant to encourage speeding, law breaking, or careless driving. It is, however, meant to convey a love for the open road, where cars, when manned by experienced drivers, can reach their full potential and offer the captain great insight into the machine.

It takes this type of road trip to truly understand a vehicle like the Cadillac XT5 Sport because for all intents and purposes, it is not necessarily marketed to young men looking for speed and thrills. This is really a family crossover, ideal for city and suburb driving, along with trips to grandma’s house and soccer practice, and those longer hauls, where both parents in the front and kids in the back can enjoy the spacious cabin.

But, perhaps the Cadillac XT5 Sport really has multiple personalities, because on this trip, I’m zipping and ripping past the California-Nevada state line, cautiously lowering my speed near the California Highway Patrol station near the Ivanpah Solar Power Facility, and the journey just feels so right.

So incredible was the trek, so good was my time en route to Vegas that I decided to make a last minute detour and visit the Seven Magic Mountains, the famous outdoor installation by Swiss artist Ugo Rondinone. And that’s where my love of the road, high speed, and the Cadillac XT5 Sport caught up to me. That’s where the law stepped in to bring me back to reality. 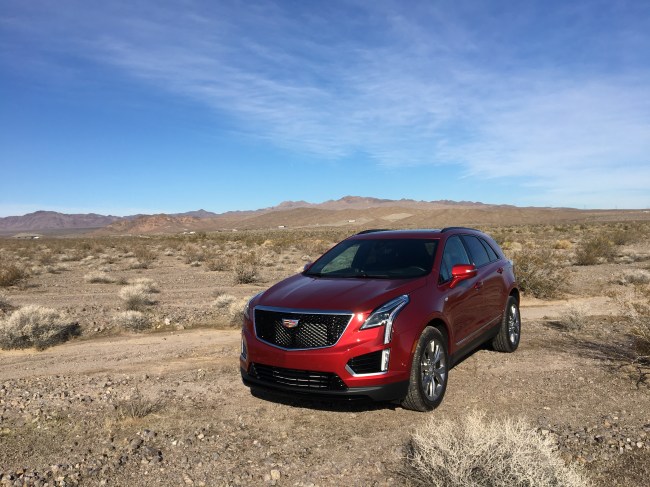 To be fair, it’s not as though I was intentionally trying to speed. Sure, I was excited to arrive in Vegas just in time for my hotel check-in, but it’s almost as if the Cadillac XT5 Sport was goading me into constant acceleration. I may or may not have a lead foot, but there was never any intention to hit top speed. The vehicle just responds so well to a bit of applied pressure, and that’s basically what I told the officer during our brief encounter.

“It’s new. I’m not really used to it yet,” I offered to the state trooper. And he bought it. But see, he accepted the excuse because it was true and I was genuine. The Cadillac XT5 really can crank, and it’s rather deceiving, because before I knew it, even after the traffic stop, I was back on I-15, hitting speeds above the posted limit. The ride is just so smooth.

Still, part of being smooth is not pushing your luck with the five-oh, and with Vegas in my sights, I showed some restraint, lightly tapping the breaks.

Overall, the Cadillac XT5 Sport performed well on the road. Pairing plenty of muscle with numerous luxury bells and whistles, it’s a vehicle that truly changed my perception of crossovers by keeping the power and speed dream alive, albeit it in a safe and law enforcement-friendly package.