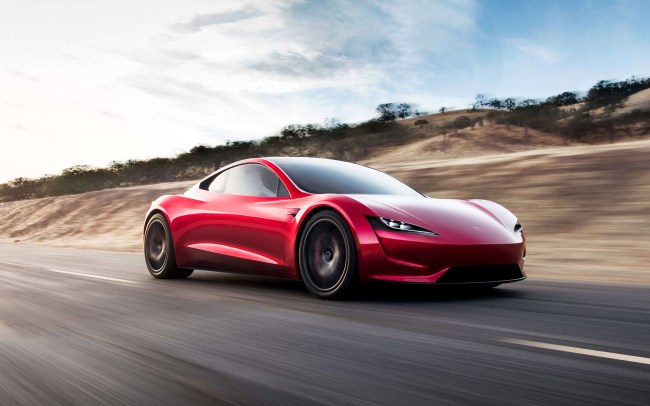 Elon Musk unveiled a new Tesla Roadster last night that’s set to be the fastest production car in the world. The all-new Tesla Roadster has a blazing fast zero-to-60mph speed of 1.9 seconds. This car is set to hit the road in 2020 and will carry a hefty price tag of $200,000, but speed doesn’t come cheap, and with a 0-to-60 time of 1.9 seconds that $200K price tag almost seems reasonable.

The 2020 Tesla Roadster will be a 2×2 four-seater. These cars will retail for $200K and you can put down a $50,000 deposit HERE to reserve yours today because who doesn’t have $50K sitting around to spend on a car they won’t get for three more years? The first 1,000 2020 Tesla Roadsters will actually retail for $250K as part of the ‘Founders Series’.

The crowd in attendance at Elon Musk‘s secret unveiling event last night were absolutely dumbstruck by the announcement of this car. It’s hard to believe that we’ve already reached a point where the fastest production car in the world is an electric car, but here we are:

When set to ‘Ludicrous Mode’, the Tesla Model S P100D is capable of going Zero-To-60mph in 2.5 seconds. This 1.9-second benchmark absolutely blows that time out of the water. It would be like riding a rocket. One vlogger got to ride in one of the all-new Tesla Roadsters to experience that 1.9 0-to-60mph acceleration firsthand at Tesla’s top secret unveiling event last night. The action starts at the 56min20sec mark here:

Tesla fans mob its surprise new supercar. 0-60 in 1.9 seconds. “Driving a gasoline sports car is going to feel like a steam engine with a side of quiche,” says @elonmusk pic.twitter.com/NRuzScy0kW

Tesla Motors CEO Elon Musk also debuted a new Tesla semi-truck last night. Over on Tech Crunch, they have a ton of GIFs, images, and highlights from last night’s Tesla Motors event. If you’re intersted in this car I highly suggest clicking that link.