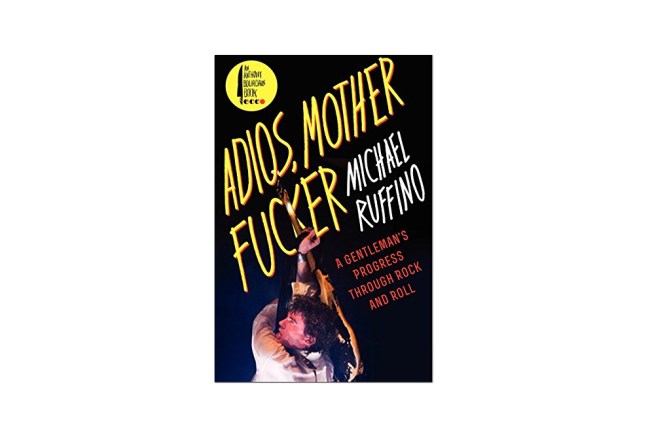 Anthony Bourdain (yes, the famous chef and TV host) has a new book imprint and their first publication is an insane glimpse of the life of an 80s musician and member of the group The Unband.

Adios, Motherfucker: A Gentleman’s Progress Through Rock and Roll is “equal parts This Is Spinal Tap and Fear and Loathing in Las Vegas” and “a riotous and unbridled testament to rock and roll.” It also involves crack-smoking Girl Scouts.

In this epic, intoxicated un-memoir, Unband bassist Michael Ruffino delves deeper into the story he originally told in 2004’s Gentlemanly Repose, taking readers along on a raucous tear through the netherworld of heavy rock, populated with crack-smoking Girl Scouts, collegiate bedlamites, shotgun-toting barmaids, a rodent-chomping music CEO, a beer-drinking chimp, and headbangers by the horde, while on tour with giants of heavy metal including Dio, Motörhead, Anthrax, Def Leppard, and a Who Was Who of reunited ’80s hair bands. Into that volatile mix, The Unband brought do-it-yourself pyrotechnics, a giant inflatable hand (for making giant inflatable gestures), a high tolerance for substance abuse of all kinds, and an infectious love of rock and roll and everything it stands for.”

This is rock and roll before the days of kale salad in the dressing room and demands for medium-sized dessert cakes. Grab a copy now.