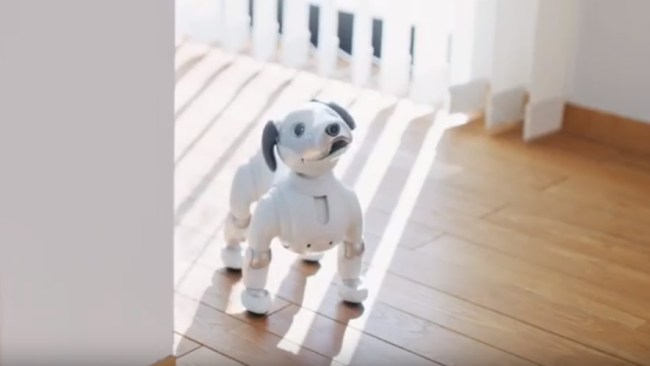 We’ve seen so much cool tech from the 2018 Consumer Electronics Show (As seen HERE), most in the form of ginormous TVs and powerful projectors. Now we get tech that is somewhat unusual, yet adorable — a robot dog. Sony revealed their Aibo robot dog at CES 2018 this week and it is pretty adorable. One look into this pup’s crystal blue OLED eyes and you’ll be asking, “Can we keep it?”

You may have heard of Aibo before, and that is because Sony rolled out their first generation Aibo doggo on May 11, 1999. Now, nearly 20 years later, Sony is releasing a new and improved robot dog. The robot puppy has 22 points of articulation, which are the robot joints where it moves. Aibo also has various motion sensors that allow it to detect and interact with humans and other Aibo dogs (They sniff each others butts. No really, they do). The robot dog is equipped with AI and voice controls so you can command your Aibo to do tricks like playing fetch or raising its paw. But the prototypes did have issues at CES, which could have been because it was noisy and there were so many people.

Inside of Aibo’s nose is a camera that allows it see where it’s going as well as identify different people. The robo doggo records who plays with it the most and develops a bond quicker with people who interact with it more. Robot puppies need plenty of sleep or (charging), especially since Aibo’s battery only lasts two hours.

Aibo is always connected to the cloud, and that costs a price. While you don’t have to pay for Kibbles n’ Bits, you do have to pay for access to cloud which costs $25-per-month. So how much do robo doggos cost? Around $1,700. Quite pricey for a fake dog, but it won’t chew up your favorite jersey or crap all over the kitchen floor.