Apple Event 2018: The Bigger Apple Watch Series 4 Comes With An ECG To Monitor Your Heart Health 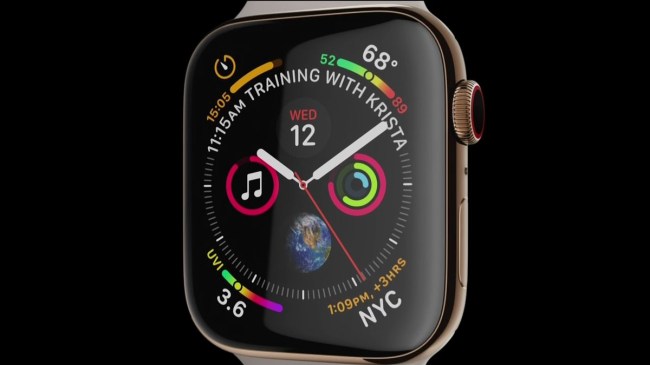 Apple held its annual “Gather Round” launch event at the Steve Jobs Theater inside the Apple Park headquarters in Cupertino, California on Wednesday. The tech giant unveiled the new Apple Watch Series 4 that puts an unparalleled focus on your health.

The new Apple Watch Series 4 features new watch bands in wider 40mm and 44mm sizes (a 30% increase of screen area of the existing Apple Watches). The new Apple Watch also has a curved OLED display that stretches nearly edge-to-edge with smaller bezels and a ceramic back. The Series 4 will also be thinner than the previous generation. There’s also a new watch fave with eight complications.

The speaker is 50 percent louder than, plus it is also farther away from the microphone to improve phone call clarity. The Apple Watch Series 4 will have a new dual-core 64-bit S4 processor, offering double the performance of the previous generation.

Three aluminum finishes include silver, gold, space gray and gold stainless, which is a new finish.

The Apple Watch will also offer electrocardiogram (ECG), which is the process of recording the electrical activity of the heart over the skin. This is the first ECG product offered over-the-counter ever. You’ll be able to monitor your heart and within 30 seconds you can have an ECG done. The Apple Watch detects potential health concerns such as an irregular heartbeat, heart attack or a stroke. The Apple Watch is FDA-approved.

The Watch will even be able to detect if you fall, but it will also know the difference if you trip or if you slip.

You can watch the livestream of the 2018 Apple event HERE.