Apple To Investigate iPhone 7 That ‘Blew Up’ On Video 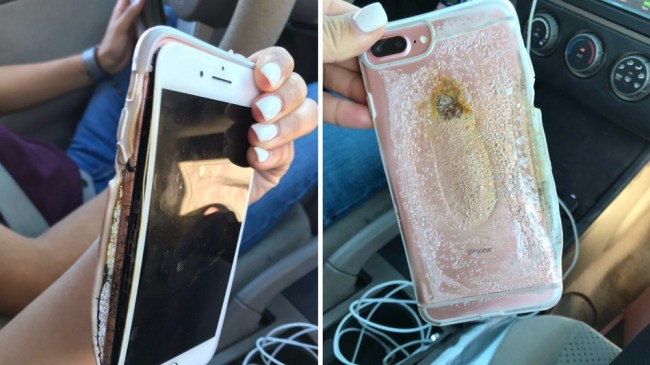 Having one of your flagship phones blow up can be disastrous for a company, just ask Samsung, who had to recall their Galaxy Note 7 after there were several instances of batteries exploding. Just like companies steal each other’s technology, it appears that Apple may have copied Samsung’s exploding battery feature.

On Wednesday, Brianna Olivas posted a video on her Twitter of her iPhone 7 smoking with the caption: “So my iPhone 7 plus blew up this morning 🤗 was not even using it, literally no explanation for this.”

So my IPhone 7 plus blew up this morning 🤗 was not even using it, literally no explanation for this pic.twitter.com/sQ8CJt4Y69

“The next morning I was asleep with my phone charging next to my head, my boyfriend grabbed the phone and put it on the dresser,” she told Mashable. “He went the the [sic] restroom … and from the corner of his eye he saw my phone steaming and [heard] a squealing noise. By the time he got over to the phone it had already caught fire, he quickly grabbed the phone and threw it in the restroom … as soon as he threw it in the restroom is [sic] blew up and more smoke started coming out of the phone.”

It is not yet known what caused the smoke, but high capacity lithium ion batteries have a history of exploding. At this time we do not know if this is a freak incident or more of a widespread issue. In September, another iPhone 7 exploded, but that was believed to be caused from physical damage that occured during shipping.

Olivas has since given her phone to Apple. A spokesperson said, “We are in touch with the customer and looking into it.”