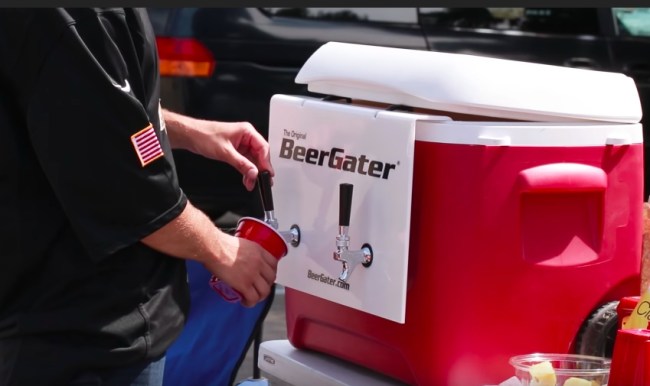 Tailgate season might never end for some people—especially BroBible’s resident diehard Phish fans— but with football season quickly approaching, it’s time to start getting ready to kick your pregaming strategy into high gear.

You have to try incredibly hard to host a bad tailgate, as it’s difficult to not have a good time when you have access to beer, food, and a nice set of cornhole (or any other game you can play with a drink in your hand).

With that said, there are plenty of potential road bumps you can hit over the course of a tailgate. Unless you’re lugging chafing dishes and Bunsen burners with you to the parking lot, it can be tough to keep food warm, but that’s nowhere near as bad as the ultimate tailgating travesty: warm beer.

Unless if you have a designated Ice Man in your crew, it can be tough to ensure every beer in the cooler is cold, and even if you use all of the koozies in the world, there’s a good chance your drink is going to warm up quicker than you’d like.

However, there’s a new tailgating accessory on the market that just put every other one on blast: the BeerGater.

The BeerGater— which has absolutely crushed its IndieGoGo campaign— is basically a keg without a keg. This means you don’t have to deal with putting down a deposit, lugging it around, or being limited to whatever the place you pick it up from has available.

The process is pretty straightforward assuming you already have a cooler (if you don’t, we have some suggestions for every budget).

First, pop open your drink of choice (the BeerGater can serve basically anything) and pour it into one of the two tanks (each one can hold 16 standard 12 oz cans).

When you’ve topped them off, you can fill your cooler with ice and attach the tap lines to your cooler (once you do so, you can also hang it on a trunk or a window).

BeerGater then uses CO2 to pressurize your beverage.

As soon as that’s set, all you have to do is close the cooler and pour yourself a cold one (which you definitely deserve after all of that minimal work).

There are still nine days left in the IndieGoGo campaign and you can preorder your BeerGater right now. Unfortunately, they aren’t expected to ship out until November, but this might be the kind of long-term investment you want to make.