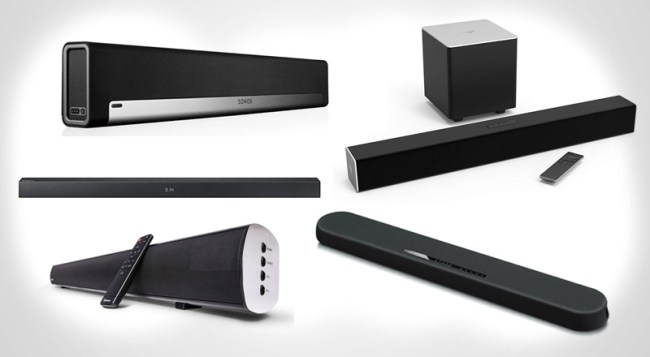 The best deals on TV soundbars should ideally be the perfect blend of price and quality. Of course, how far the scale slides in each direction for the absolutely perfect TV soundbar deal for you depends on your own individual needs. So, whether you want the best of the best, or just want something inexpensive to do the job for you that will still, you know, work, we’ve got you covered with these best deals on TV soundbars.

Most soundbars require a subwoofer for max performance, but the Bose Solo 5 is designed to work all on its own, delivering incredible clarity of sound, including “dialogue mode,” which works to make every word stand out on its own. It also has Bluetooth connectivity, which lets you stream music to it whenever you want.
—
Buy Here

Subwoofers are built-in to this ultra-slim soundbar, giving you deep bass, which makes a great contrast to the crystal-clear dialogue. Add the Bluetooth that comes with it, and you’ve got the perfect centerpiece for your home entertainment system.
—
Buy Here

This soundbar comes with a separate subwoofer, which connects wirelessly so you don’t have to worry about any messy cables lying around. The soundbar itself features Hi-Res audio, which is perfect for true audiophiles, and the sound is designed to be immersive, meaning that you get a multidimensional effect, creating a true theater experience. It’s also capable of “upscaling” poorer quality audio, which means that it converts it on the spot to something that, well, that sounds better.
—
Buy Here 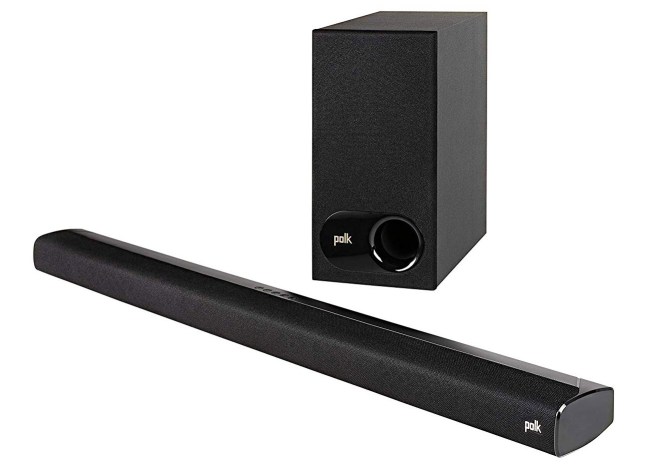 Ultra-slim, this offering from Polk comes with a wireless subwoofer, and features something called “Polk Adjust Technology,” which is a fancy way of saying that it works to make every sound crystal clear. So, whether you’re into dialogue or just want to hear every bang and boom of those huge explosions, this soundbar has you covered.
—
Buy Here 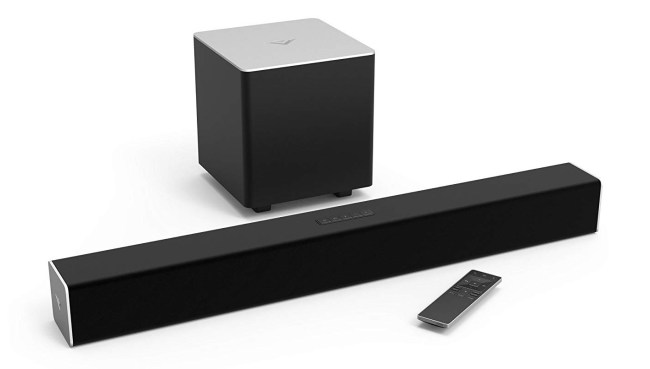 First things first: this is listed by Amazon as its “#1 Best Seller” in TV soundbars. That’s a pretty good place to start, right? It features 2.1 audio channels and comes with a separate subwoofer, all of which combines to give you perfect sound quality up to 95 decibels, which is roughly as loud as a Boeing 737 as it comes in to land. Yeah, this soundbar will do the job for you.
—
Buy Here 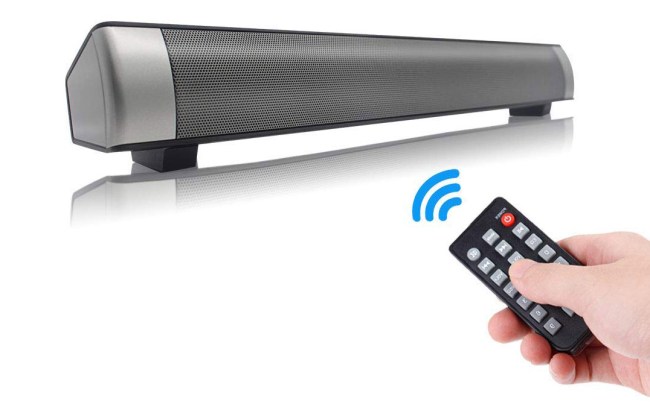 Listen, some of you probably don’t want to pay a lot for a soundbar. I get it. That’s where this one comes in. It will get the job done without heavily impacting your wallet. It still provides 2.0 sound channels and has Bluetooth connectivity. It’s a great pickup for anyone who just needs a basic soundbar, especially perfect for someone just getting the ball rolling on their home theater experience. It’s a great deal.
—
Buy Here

Four built-in speakers and two tweeters combine to provide up to 105db of clear sound, which is akin to standing next to a jet on the ground. It’s a little less expensive than some of the bigger name brand soundbars without sacrificing any of the quality.
—
Buy Here

Sometimes, the best way to find the best deals on something like TV soundbars is to dip just a year or two into the past. That’s where this model comes in. It’s Samsung’s 2017 model, which means it isn’t quite as expensive but still gets the job done just as well. I mean, let’s face it, there hasn’t exactly been a quantum-leap in listening technology in the last two years, right? I mean, this still features 2.1 channel sound, comes with a subwoofer, and is Bluetooth capable. You’re good to go.
—
Buy Here

Another mid-range – aka affordable – soundbar, this one is a great blend of price and quality. Basically, you’re just not paying extra for a big brand name. Of course, there is added security in a big brand name, so really, it depends on what you’re comfortable with. It features 2.0 sound channels and is designed to “fit” any sized TV. It also features three separate listening modes – Music, News and Movie – all of which are designed to feature different sound aspects, allowing you to tailor your experience to your needs.
—
Buy Here

The really cool thing about this soundbar is that it features built-in hearing aid technology, which makes all the sounds, especially the voices, ultra-clear. It also has something called an “Output Leveling” button, which you push on the remote that comes with this, and it instantly quiets those super-loud commercials. Or boosts quiet Blu-Ray players. Either way, you’re good to go.
—
Buy Here 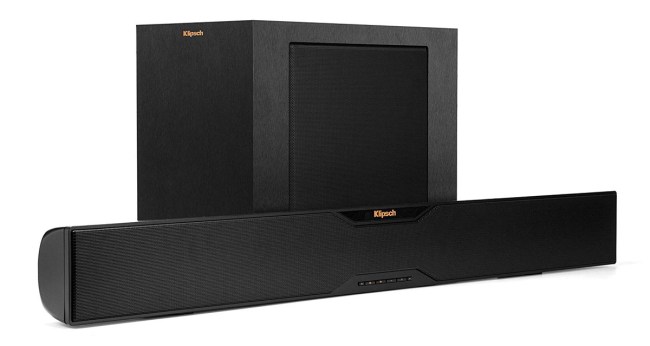 We kick things up a notch with this soundbar/subwoofer combo from Klipsch, which is renowned for high-quality speakers. It works to increase sound details on a sliding scale, and what I mean by that is it concentrates extra effort on midrange sounds, which is where you find dialogue and most of the detail in the things you watch. This means that you get an appropriate blend of sounds without the bass overwhelming everything. After all, you don’t just want a louder version of your TV speakers. You want something better, and you get it from Klipsch.
—
Buy Here

Like the other ZVOX discussed earlier, this one features that AccuVoice hearing aid technology. But it also features 3D sound, which makes it the perfect fit for more advanced TVs. After all, what good is your monster TV with hollow, one-dimensional sound? And, finally, the built-in subwoofer uses digital technology to give you awesome bass without the need for a separate cabinet.
—
Buy Here

This soundbar also boasts 3D sound quality, but I won’t beat around the bush here: it’s by far the least expensive TV soundbar you’re gonna find. It doesn’t have that name brand, and it doesn’t really have a ton of reviews yet, but all of the reviews it does have are five stars, so… yeah, if you’re looking for a huge deal and are ready to roll the dice a bit, this is what you’ve been looking for.
—
Buy Here

First things first: this is Amazon’s experts’ pick for the best of the best when it comes to TV soundbars. I mean… there you have it. Of course, that also means that it’s the most expensive by far. But if you really want the best of the best, this is what you want. It works with Alexa and has nine different amplified speaker drivers. You just aren’t going to find a more powerful – or clearer sounding – TV soundbar. It makes everything sound cinematic, but even better, it is an audiophile’s dream when it comes to playing music. Its sound is so refined, so crystal clear, that it brings out the entirety of a song in ways that your other speakers just can’t dream. No wonder it’s considered the best.
—
Buy Here 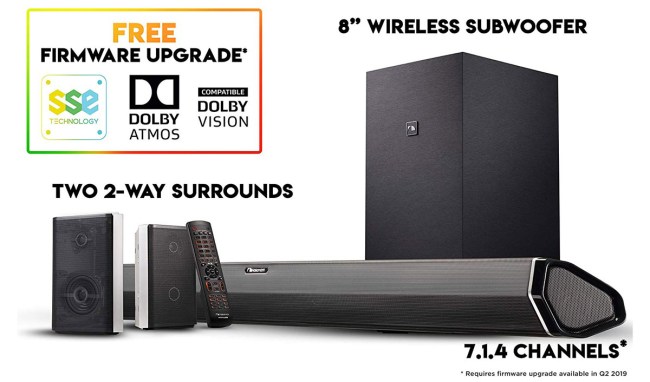 If you just want to go all in and get the entire home theater shebang, this is for you. The soundbar itself is great – I won’t bore you with all the details, because that’s not really the point here, but it’s great, okay? – but the real allure is that this comes with not only the soundbar but a subwoofer and two rear surround speakers, all of which add up to give you an awesome 7.1 channel surround sound home theater. Instead of building it piece by piece with speakers that might not work that well together, just grab this monster, with the knowledge that each speaker, each part, is designed to work flawlessly with one another. And never have to worry about your home theater again.
—
Buy Here