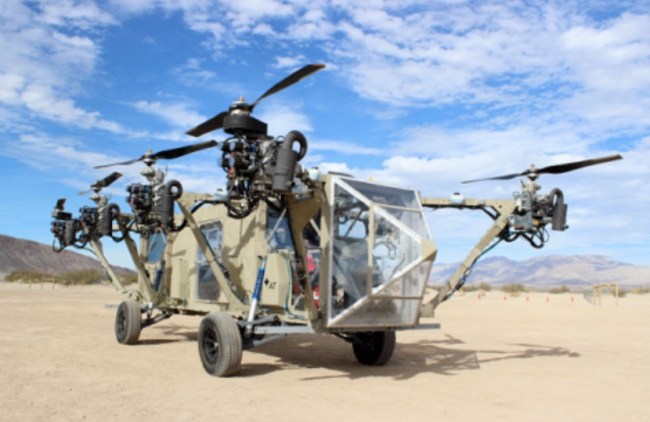 Here’s a quick description of the truck-helicopter hybrid:

The Advanced Tactics (AT) Black Knight Transformer is the world’s first VTOL (vertical-takeoff-and-landing) “flying car” to be successfully flown in free (untethered) flight and also drive on the ground like a regular car. This is the historic original technology demonstrator that completed multiple successful VTOL flight and driving tests. The Black Knight Transformer uses 8 aircraft engines for VTOL flight, with each engine connected to a propeller for lift and control of the aircraft. A dedicated car engine and automatic transmission drives the vehicle on the ground.
The Black Knight Transformer was designed to drive on and off road with up to 6 people at speeds up to 70 mph, and then to transform into a VTOL flight vehicle to take off from and land in small spaces. With the propeller/engines arms folded against the vehicle, it has a width of just 8 ½ feet (although this vehicle is not yet registered for driving on public roads). In addition to successful driving and flight tests, the Black Knight Transformer has been transported coast-to-coast on a custom trailer (included with this sale) that can be pulled by a large pickup truck.(via) 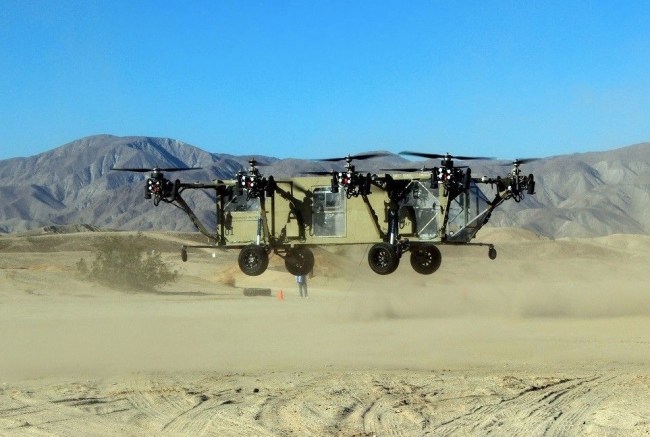 You’ll need plenty of spare cash sitting around for the ‘buy it now’ price of $1,980,000.00. I suppose there’s some good news: the reserve bid price on eBay starts at $980,000.00 and nobody’s met that price yet. So, while this might cost you an arm and a leg you can at least sleep soundly at night knowing there’s not much bidding competition on this yet and it could be yours.

The AT Black Knight Transformer doesn’t have FAA certification for flying nor is it licensed to be driven on public roads. So you’ll need plenty of private land in order to enjoy your awesome new toy. That, or you’ll need some powerful friends who can expedite your permits and certifications.

You can check out the full listing of the AT Black Knight Transformer on eBay HERE if you want to throw in a bid and/or watch to see if anyone else makes a bid.