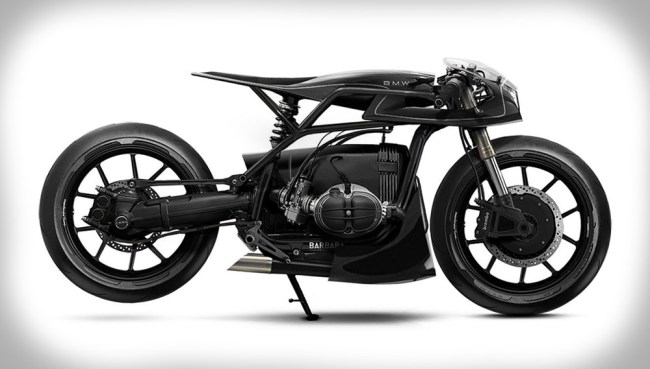 The BMW R-Series of motorcycles from the 1980s is one of the more popular bikes when it comes to being used as the base for some creative customization. They already are one of the sharpest-looking motorcycles ever created, so adding some more contemporary touches serves to only enhance it.

And this BMW R80 “Black Mamba” concept bike designed by Paris-based Barbara Custom Motorcycles is one that we’d like to see go into production right now.

The original BMW R80G/S was manufactured in by BMW Motorrad from 1980 to 1987 and was the very first in the BMW GS family of adventure bikes designed to be ridden both on and off the road. Its popularity grew after numerous wins in the Dakar Rally.

Keeping the original look of the flat-twin airhead engine, unique carburetors and single-side swingarm, Barbara Custom Motorcycles added a modern RnineT swingarm, USD front forks, and mashed the the seat, tank and headlight all into one futuristic saddle, creating the kind of bike Batman should be riding in the year 2118.

Of course, this BMW bike isn’t the first Barbara Custom Motorcycles design to wow the senses. Here are a few other concept designs including a Honda CX500, Moto Guzzi 1200SE, and a Triumph Speed Triple/PalawanStag that look like they’d be an absolute dream to ride.