Are you ready for the Memorial Day weekend to kick off grilling season? Summertime means that it’s time to stock up on all the meat we can get our hands on! But instead of heading down your local grocery store and choosing from a slim pickens, why not choose ButcherBox – America’s Premier Meat Subscription Service.

Now, look, ButcherBox is already incredible as is, but get this: They’re giving away two New York strip steaks, six burgers, and five pounds of drumsticks for FREE on your first order, meaning it’s the best time of the year to snag a subscription. 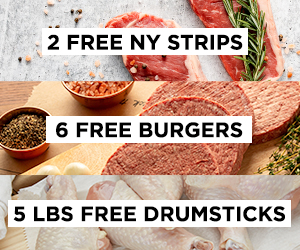 Plus, what’s better than getting two New York strip steaks, six burgers, and five pounds of drumsticks for FREE on your first order from ButcherBox after signing up for a membership? Oh, right nothing! That’s 7+ pounds of high-quality meat for no extra cost.

So make the switch to ButcherBox now to get 100% grass-fed beef, free-range organic chicken, pork that’s raised crate-free, and even wild-caught seafood to help kick-off grilling season, and become the master of the grill this summer once and for all.