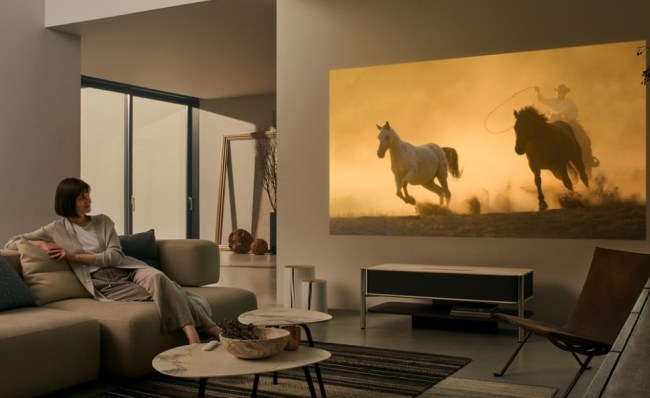 This Sony projector is definitely not your father’s projector. Sony’s Ultra Short Throw LSPX-A1 Projector was introduced at the 2018 Consumer Electronics Show and it is not only a 4K projector, but also a stylish piece of furniture as well as a room-filling sound system. The LSPX-A1 is a beautiful marble-topped credenza equipped with a short throw projector that can beam a 120-inch picture onto your wall. That’s right, no hanging a projector from your ceiling and having it stand out like a sore thumb. Besides the artificial marble top, the frame is finished in half-mirror aluminum and has a wooden shelf so it seemlessly looks like part of your living room furniture.

Embrace your space and engage your senses. Bring a whole new world to your living space with the all NEW LSPX-A1 4K Ultra Short Projector #SonyCES https://t.co/KIo3XBHxfr pic.twitter.com/gYVIRMy9Wn

As far as performance goes Sony’s SXRD laser projector has 4K resolution, reaches a peak brightness of 2500 lumens, and is HDR-compatible. For 4K content, the projector is compatible with $99 Roku Ultra, a $179 Apple TV 4K, or your favorite 4K Blu-ray player to watch video “with unprecedented detail, color, and contrast.” By placing the projector a mere 9.6 inches from the wall, it can beam a 120-inch image to your living room wall. No need for a soundbar for this projector either (And you shouldn’t for the extreme price of this projector). The Sony projector features built-in speakers with organic glass tweeters installed on the front legs of the frame. There’s a subwoofer underneath the unit and three midrange speakers (center, left and right) hidden inside that provide 360-degree audio. 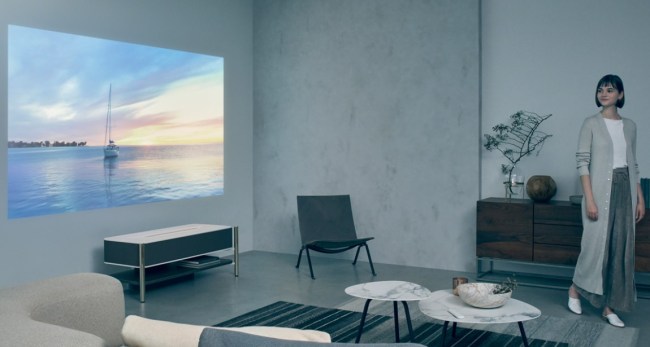 But Sony believes that their projector is so immersive that you just won’t watch Black Mirror on it.

Imagine a forest appearing on your living room wall, with the relaxing images and sounds of nature enveloping the entire space. LSPX-A1 is designed to transform your living space with beautifully detailed pictures and atmospheric sound that blend in effortlessly with your surroundings, creating striking 4K visuals emerging on your walls and crystal clear sound filling every corner of the room.

The price tag on the Sony LSPX-A1 is $30,000. For that price many would expect it to transport them into nature and not just project it on their walls. In case you were planning on spending the same amount as a new sedan for a projector, Sony says their projector will be available to purchase this spring. Check out all of the amazing tech coming from the 2018 CES HERE.