BroBible may earn a commission if you buy a product or service via links in this article.
by Brandon WenerdMarch 27, 2018 6:12 pm 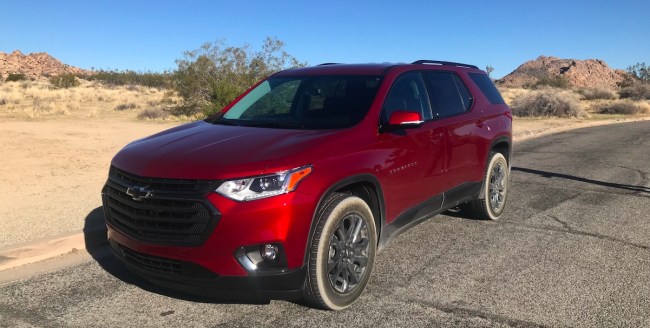 Fun fact: The average wild wolf pack roams around a 65-mile radius that it calls home. That’s thousands of square miles of home turf, wandering around to hunt, raise it’s young, and howl at the moon.

When you really think about it, our closest friend groups aren’t that dissimilar to wolf packs. We take trips to Vegas together, we hit football and basketball games together, we camp in the open desert together, howling at the moon together. The deep human desire of being *together* is what makes us social animals at the end of the day, surviving on instincts that are best for the entire flock, not just individual units.

Shared experiences are the ultimate bond for a wolf pack. When your goal is an adventure with friends, the importance of getting from Point A to Point B is secondary only to the common group goal of being together, experiencing the journey as a whole unit. And that’s why Chevy’s three-row, mid-size 2018 Chevrolet Traverse RS is the ultimate friend-group adventure car. There’s comfortable seating for up to eight, plus best-in-class max cargo space of 98.2 cubic feet. That means plenty of room to stash camping equipment, tailgating supplies, luggage, and whatever else you might need to lug along with your buddies in a stadium parking lot or music festival campground.

I tested out the social components of the Traverse this past fall, loading up a group of office buddies to hit a couple back-to-back sporting events around Los Angeles. The whole squad fit comfortably in the Traverse, making for an easy trek in peak L.A. rush hour traffic to watch the 76ers flex a little East Coast dominance against the Lakers. Wolf pack status heading downtown as a crew: Unlocked. 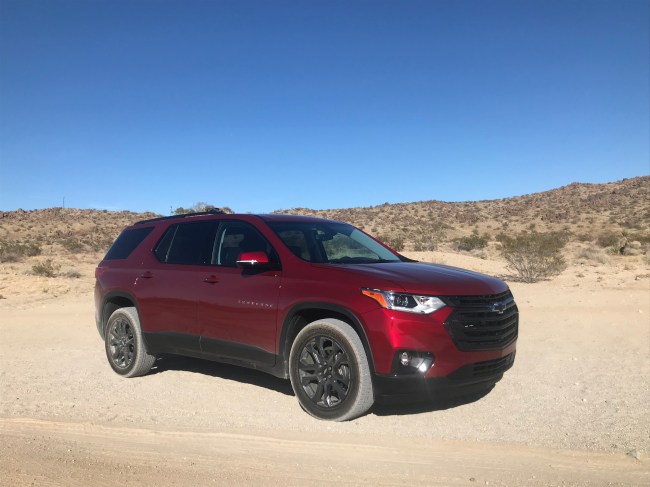 Compared to other V6 models in the Traverse line-up, the all-new RS includes a sporty turbocharged 2.0 liter V4 engine boasting 255 horsepower and 295 pound-feet of torque. It doesn’t have the towing capability of the all-wheel drive V6 models, but that won’t stop the average weekend warrior looking to get around town with the whole crew in the cab.

The nine-speed automatic transmission is silk smooth and the gas economy for Traverse RS is particularly clutch: 20 mpg around in stop-and-go, 26 mpg highway, making it idea for those lengthy road trips with the wold pack. There’s a huge, eight-inch MyLink infotainment display in the dash and plenty of crank in the Bose 10-speaker audio system. In fact, on a music-focused pilgrimage to Pappy & Harriet’s high country desert honky tonk near Joshua Tree, Gram Parson’s Grievous Angel sounded just as crisp and wistful as the day it came out in 1974.

That sonic quality is the ultimate feather-in-the-cap for Chevy: After all, they’re the first auto manufacturer to introduce the world to the car radio in 1922, complete with an antenna that “…covered the car’s entire roof and two huge speakers sat behind the front seat.”

Looking back, 96 years later, that pivotal moment made finding new roads just that much more fun. If you can’t experience Gram Parson’s “Oooo Las Vegas” at top volume in a car full of friends on the way to Las Vegas, why have an adventure at all? 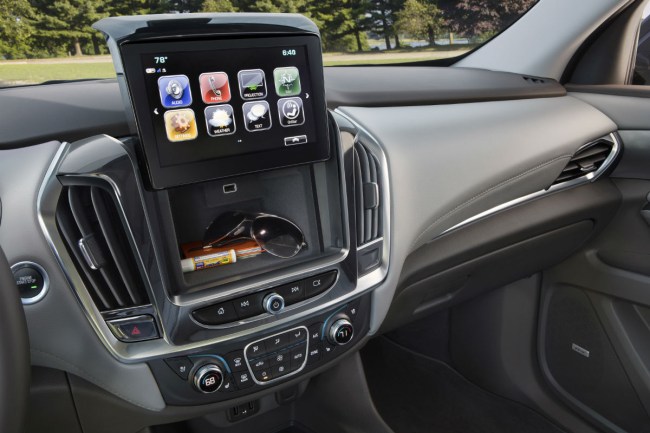