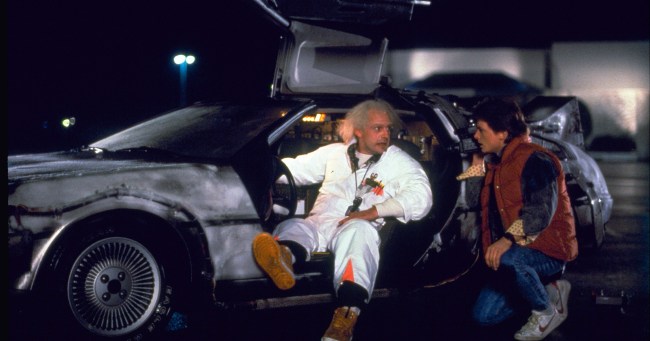 On a day we get news about an upcoming sequel to Bill & Ted’s Excellent Adventure with their time-traveling telephone booth, it is appropriate we get an announcement that the most popular cinematic time-traveling machine is getting a new modernized model. The DeLorean DMC-12, which was made famous for being the time machine in Back to the Future, is set to return.

The very first DeLorean DMC-12 rolled out on January 21, 1981, and was incredibly innovative at the time. The vehicle has iconic brushed stainless-steel body panels and gull-wing doors. The futuristic-appearance made it the choice to be the time-traveling vehicle in Back to the Future. However, the DeLorean Motor Company went bankrupt in late 1982 following the arrest of John DeLorean, the company’s founder. Despite being found not guilty for drug-trafficking, John’s company couldn’t recover and production of the DMC-12 stopped in early 1983. But there could be a rebirth of the revolutionary car. The DeLorean Motor Company hopes to start production on the DMC-12 before the end of the year. The questions everyone is asking is if the new model will need roads and do you need 1.21 gigawatts to power it?

“We’re hoping by the end of this year we’ll convert part of this facility over to an assembly area and we’ll be assembling initially 22 cars a year,” said Stephen Wynne, CEO of DeLorean. Wynne purchased the DeLorean Motor Company back in 1987 and has invested $5 million into rebuilding the auto manufacturer. Wynne is a “self-taught English mechanic who emigrated to the U.S. in 1980 just as former GM executive John DeLorean was preparing to launch his eponymous car brand.”

The DeLorean DMC-12 is coming back to the future. No word on if it will be powered by gas, electric, plutonium or garbage. But if it doesn’t have a flux capacitor it will be pretty disappointing, but I suppose a Mr. Fusion Home Energy Reactor will be sufficient because I definitely want to see some serious shit. In other 80s classic movie news, Danny McBride appears to be in a new Crocodile Dundee film, but it probably a huge prank that will end up only being a Super Bowl ad.