New Trailer For ‘Crocodile Dundee’ Sequel Out With Chris Hemsworth But Is It A Super Bowl Joke? 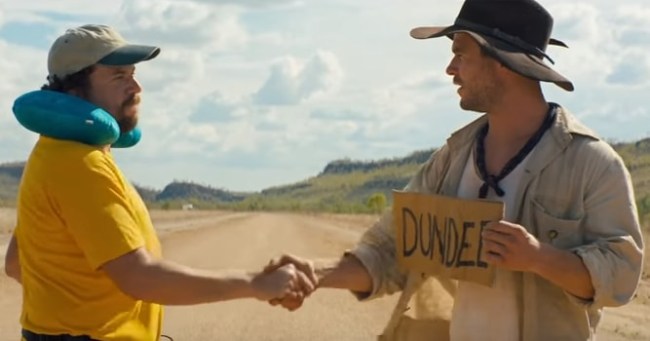 Last week, a trailer for a Crocodile Dundee sequel starring Danny McBride as the long-lost son of Paul Hogan’s character in the 1986 comedy movie was released. Now we get a new trailer for Dundee: The Son of a Legend Returns Home that features Chris Hemsworth speaking in his natural Australian accent. However, McBride might be playing a prank on us all because the movie might be a fake film for a Super Bowl ad.

There are rumors that the movie is merely an elaborate prank that will end with a Super Bowl commercial. Many film journalists have pointed out that they have not been contacted by Hollywood PR agents about the movie and haven’t received any promotional clips, photos or information about the Dundee movie. Which is something they would get for a big film like this. Australia’s federal government film agency, Screen Australia, does not list Dundee as in pre-production, production or post-production taking place in their country.

This could very well be a joke and a fake movie that ends up being a Super Bowl commercial. There is speculation that it could be a commercial for Aussie beer brand Fosters or the Australian tourist board, especially since Hemsworth is a Tourism Australia ambassador. We’ll have to wait until Super Bowl LII to see if it is an ad or not. If it is a Super Bowl commercial, many Crocodile Dundee fans will be like…

“Crocodile Dundee is back! Well, actually, he’s missing in the Outback. And the only person who might be able to find him is the loudmouthed American son no one knew he had. Introducing Danny McBride as Brian Dundee. This son of a legend is forced to channel his Aussie roots as he embarks on the ultimate adventure in the land down under. It’s time to live up to the family name. Unlike his father, Brian grew up a true city kid. But that won’t stop him from picking up his dad’s oversized knife and launching into the Australian outback, completely unprepared for what lies ahead.”