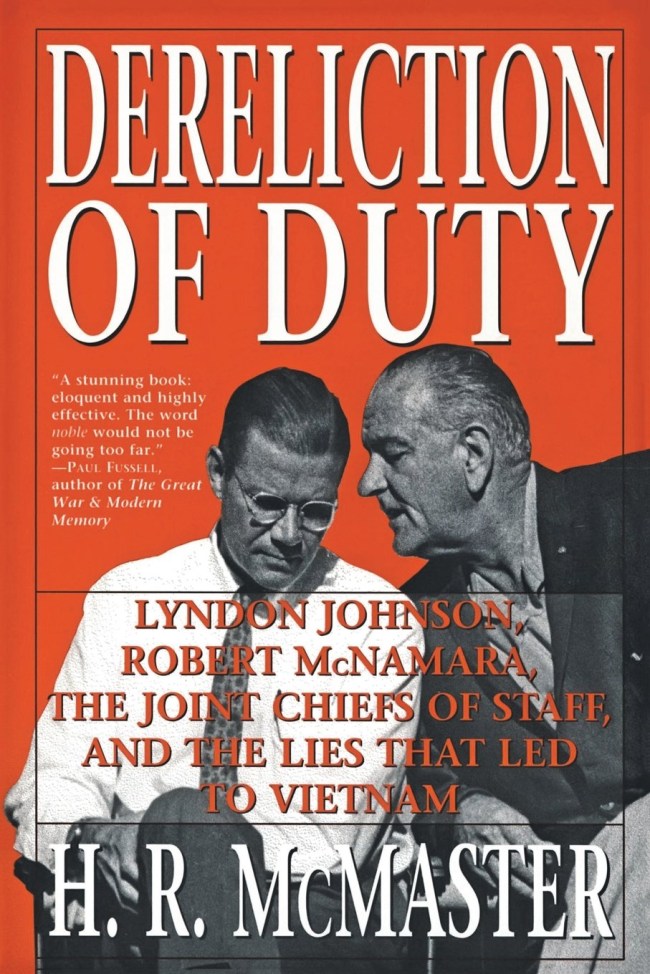 Yesterday, President Donald Trump appointed Lieutenant General H.R. McMaster as his new National Security Advisor after the role was left vacant following Michael Flynn’s resignation when it emerged he had not been truthful with Vice President Mike Pence with regards to communication with Russian officials on the heels of Trump’s campaign.

Widely regarded as one of the preeminent American military minds, Lt. Gen. McMaster has published a number of works in the scope of American conflict in wartime, with the most famous being the book Dereliction of Duty: Johnson, McNamara, the Joint Chiefs of Staff, and the Lies That Led to Vietnam.

Chances are if you watched even a minute of news addressing Trump’s appointment yesterday, you probably heard this book referenced. In fact, it skyrocketed to the #1 Best Seller on Amazon overnight, and understandably so, as there’s positively tons of people looking for some insight into the new National Security Advisor’s perspectives. For only $15, you can pick up a paperback copy, too.

Essentially curriculum at this point for anyone in the United States military, the book outlines the series of administrative failures that exacerbated American casualties in the Vietnam War, making it one of the bloodiest wartime efforts in the history of the nation.

Dereliction of Duty is a stunning new analysis of how and why the United States became involved in an all-out and disastrous war in Southeast Asia. Fully and convincingly researched, based on recently released transcripts and personal accounts of crucial meetings, confrontations and decisions, it is the only book that fully re-creates what happened and why. It also pinpoints the policies and decisions that got the United States into the morass and reveals who made these decisions and the motives behind them, disproving the published theories of other historians and excuses of the participants.

Dereliction of Duty covers the story in strong narrative fashion, focusing on a fascinating cast of characters: President Lyndon Johnson, Robert McNamara, General Maxwell Taylor, McGeorge Bundy and other top aides who deliberately deceived the Joint Chiefs of Staff, the U.S. Congress and the American public.

Sure to generate controversy, Dereliction of Duty is an explosive and authoritative new look at the controversy concerning the United States involvement in Vietnam.

Whether you’re an avid reader, or simply somebody curious about Lt. Gen. McMaster’s rhetoric, views, and criticisms prior to his appointment, this book is a phenomenal place to start.