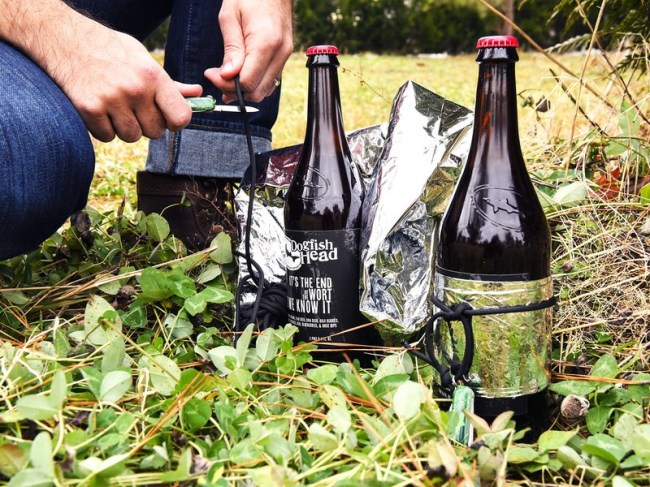 Dogfish Head has been one of my favorite beer brewers since I first discovered the 90-Minute IPA back in college. They’ve pushed the envelope more than any other brewery in America, truly stretching the definition of ‘beer’ with some of the craziest concoctions imaginable. Their latest creation is a survival beer which has aptly been named It’s The End of the Wort As We Know It. This 750ml beer will retail for $45/bottle and be sold with a thermal blanket and special edition Dogfish Head Swiss Army knife.

This beer was borne out of a conversation amongst the Dogfish Head brewers where they were discussing which beer they’d each bring if they were stuck on a deserted island. The beer itself is chock full of amino acids and essential vitamins. It’s a nutrient-rich beer. And while they can’t come out and say ‘survivalists should drink this beer’ because of FDAA regulations they can hint that this beer has more nutrition than anything else out there:

To make this off-centered ale, Dogfish blended an intensely fruity mixture of blueberries, acai and goji berries along with an assortment of ingredients including purple sweet potatoes, rose hips, chia seed, flax seed, spelt, oats and quinoa. While It’s The End of the Wort As We Know It is nutrient-rich, Calagione says, “We are not making any health claims in association with this beer. We are merely sharing our brewing process and the culinary ingredients we chose for the recipe that are rich in alluring aromas and flavors.” Slightly tart and subtly sweet with jammy blueberry, cranberry and cherry flavors, this medium-bodied beer clocks in at 9% ABV and is a critical off-centered ale to include in your survival bunker. (via)

Unfortunately, only 200 extra large bottles (750ml) of this beer will be released. So if you want to score a bottle and one of the special edition Dogfish Head Swiss Army knives you’ll have to show up to the brewery on January 27th at 11am when the beer goes on sale in Delaware.

For more on this Dogfish Head survival beer, you can head over to New School Beer.