Ford’s 50th Anniversary Mustang ‘Cobra Jet’ Will Be The Most Powerful, Quickest Mustang Ever 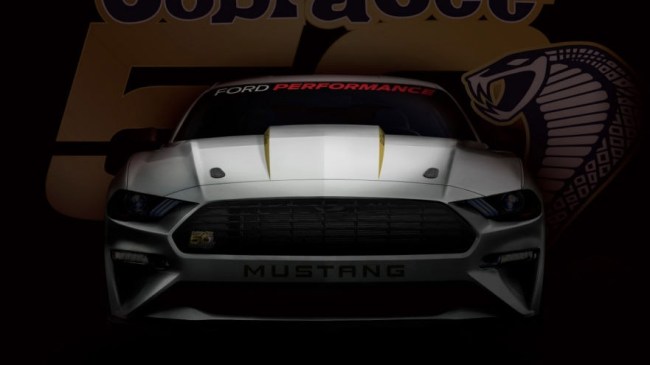 Fifty years ago, in 1968, Ford dealer and racer Bob Tasca rolled out the very first Ford Mustang “Cobra Jet.” In short order, the car then began to dominate and proceeded to go and win the 1968 NHRA Winternationals.

Back then, you could order your very own Ford Mustang with the optional 428 cubic inch Cobra Jet engine, officially rated at 335 horsepower and dominate your buddies on the streets or at the track.

Now, 50 years later, the Ford Mustang “Cobra Jet” is here to kick asphalt once again. Ford reports that the 2018 version will be the most powerful and quickest Mustang from the factory ever, capable of running the quarter-mile in the mid-8-second range while topping 150 mph.

It will be a limited production run of 68 cars (68… get it?) available in Race Red or Oxford White and will be powered by a supercharged 5.2-liter Coyote V8.

“From the very first Mustang ‘Cobra Jets’ dominating the 1968 NHRA Winternationals to our modern-day ‘Cobra Jet’ racers, the Ford Performance Parts team continues to build the ‘Cobra Jet’ brand based on its success at the track over five decades,” said Eric Cin, global director, Ford Performance Parts. “That, in turn, has inspired generations of Mustang fans to create their own performance machines for the street.”

Here’s what a couple of previous versions looked, and sounded like…

Final 2018 Mustang “Cobra Jet” ordering and product specifications will be released this summer. And I am guessing that if you are one of the lucky 68, you’ll end up being as happy as these people were back in 1968.