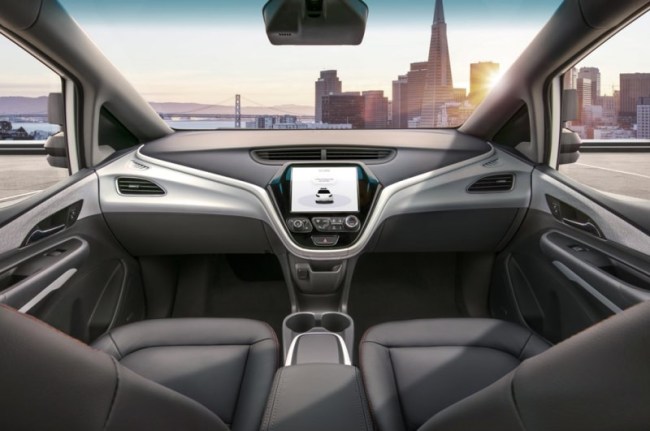 At the Consumer Electronics Show only days before the annual North American International Auto Show (NAIAS), General Motors revealed their new autonomous vehicle called the Cruise AV. It is designed to drive safely with no driver, no steering wheel, no pedals or any other manual controls. GM did say there will be a button that passengers can press and it will stop the car on demand in case of an emergency. There is an infotainment screen in the main console as well as in the headrests. Passengers can also utilize an app to change climate control and audio systems.

GM did not specify how many cars they would manufacture or exactly when it would be available for sale. GM will probably wait to mass-produce the self-driving car until they get approval from the National Highway Traffic Safety Administration. A version of the vehicle with driver controls is currently being tested on public roads in San Francisco and Phoenix. However, they feature a large array of sensors on the roof that assist it to navigate around.

“A car without a steering wheel can’t have a steering wheel airbag,” GM President Dan Ammann said. “What we can do is put the equivalent of the passenger side airbag on that side as well. So its to meet the standards but meet them in a way that’s different than what’s exactly prescribed, and that’s what the petition seeks to get approval for.”

A self-driving car sounds like a dream when there’s bumper-to-bumper traffic and you can sit back and relax, maybe take a nap, maybe work during your infuriating commute. But a completely autonomous car doesn’t sound so hot in other circumstances. Let’s say you live near a volcano. And let’s say said volcano erupts. Blistering molten lava that has the temperature of over 2,100 degrees is flowing down the side of the volcano towards your home. The mouth of the volcano spits out ash and fiery rocks that ignite wildfires all around you. You jump in your self-driving car and it only goes the speed limit, which is 25 mph in your neighborhood. Plus your car doesn’t know what to do when a fire blocks off multiple streets. There’s no steering wheel or pedals to override the system and you and your self-driving car go up in flames. No thanks, I’ll take my old school steering wheel and gas pedal.