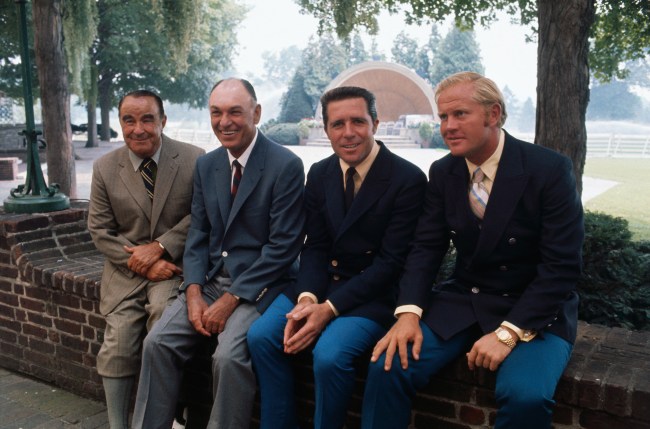 Jack Nicklaus is the G.O.A.T. of the golf world. He had 117 professional wins including 73 on the PGA Tour. Among those wins were a record 18 major championships (6 Masters, 4 U.S. Opens, 3 Open Championships, and 5 PGA Championships).

It’s not crystal clear what Jack Nicklaus’ net worth is but some websites have his net worth listed at around $320 million. He’s made an enormous fortune in the building of golf courses, apparel, gear, and he made a decent amount as a professional golfer even though the prize money was nothing back then compared to what it is now.

One of the prized possessions Jack acquired throughout the years with his vast fortune is an 18-karat yellow gold Rolex Day-Date reference 1803 watch. It’s the wristwatch Jack is best known for and if his story’s to be believed, it’s the only one he owns. He’s been featured on the watch blog Hodinkee where he discussed his iconic Day-Date Rolex. The story goes that Rolex wanted to give him a watch but he didn’t know anything about them. Gary Player convinced him the Day-Date Reference 1802 was the one to get and the rest is history:

Now, Jack Nicklaus is putting up his famous watch for auction. Two years ago, a similar watch owned by Paul Newman sold for $1.7 MILLION at auction and there are reports that Jack’s watch will fetch an extreme fortune for charity:

The original 18-karat gold Rolex Day-Date that Nicklaus owned and worn is being auctioned for charity, with all the proceeds to be given to his Nicklaus Children’s Health Care Foundation, according to Nicklaus. According to reports, a similar watch owned by Paul Newman sold for $1`7.7 million in 2017. Jack’s gold Rolex, which can be seen in most photographs of Jack after 1967, including 12 of his 18 major titles, might fetch a similar amount when it goes up for auction on Dec. 10.
If it does fetch in the range of tens of millions, it would undoubtedly be one of the most expensive sports memorabilia sales in recent memory.

“To know that 100 percent of the money raised from the sale of something on my wrist, that I have treasured for over a half-century, will directly benefit pediatric care is a treasure of the heart,” Nicklaus said in a release. (via Golf Digest)

I’m going throw out a guess of $2.2 million. That’s how much Jack’s watch will sell for after it hits the auction block later this year. The auction will be hosted by Phillips on December 10th late this year.

Side note: for some reason every time I write about Jack Nicklaus my brain unconsciously tells me to type out Jack Nicholson even though those two dudes have virtually nothing in common. And vice versa, my brain always sends signals to type ‘Jack Nicklaus’ when I’m writing about Jack Nicholson. Can any of you readers who are doctors tell me if I have a neurological disease? I wouldn’t put it past my brain to be diseased.

For more on this watch and the forthcoming auction, you can click here to visit Jack’s website.