#Justin Timberlake
BroBible may earn a commission if you buy a product or service via links in this article.
by Jorge AlonsoFebruary 4, 2018
Facebook Twitter Reddit Flipboard 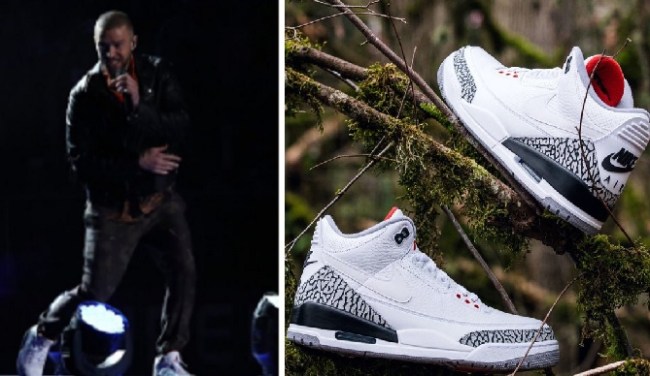 Before Justin Timberlake’s Super Bowl performance on Sunday, Nike said they were releasing multiple editions of Justin Timberlake signature Air Jordan 3’s during the singer’s “Man on the Woods” tour.

Using the original Air Jordan III sketch as its foundation, this colorway is the first of multiple editions to take inspiration from Timberlake’s recently released “Man of the Woods” album. Featuring a reflective Swoosh, the shoe is designed to add extra flare to Timberlake’s stage presence under the bright lights on Sunday night.

I grew up idolizing Mike, and ever since we met, he and I have always had a great relationship,” says Timberlake. “Working together with his team to make shoes that we love was always something we wanted to do. So when we had success with the ‘Legends,’ we knew we would have to find another great moment to do that again. This album and really this specific performance felt like the right – and even bigger and better – moment to collaborate.”

During his Super Bowl halftime performance, Timberlake was seen rocking a pair of his signature shoes on stage and they looked pretty damn fire.

The Justin Timberlake variation of the Air Jordan 3’s are dropping tonight on the SNKRS app according to Nike.