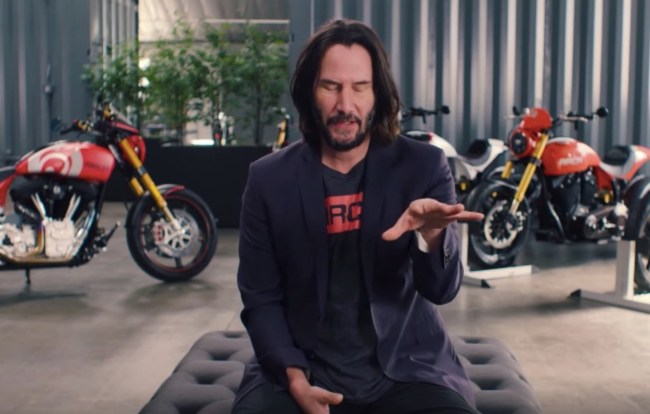 By all objective measures, Keanu Reeves seems like a really chill dude. There are constantly stories about him interacting with fans in meaningful ways. He was recently on a flight from SF to LA which made an emergency landing in Bakersfield so he rented a van/bus and rode with fans while reading them Bakersfield trivia along the way.

I’m already sidetracked here…back on task: his motorcycles. Keanu Reeves has one of the most impressive motorcycle collections that you’ll find anywhere in America. He houses most (all?) of them at his shop, Arch Motorcycles, where he recently opened the doors for a behind-the-scenes look at his rarest and most beloved motorbikes.

Included in this collection is the badass Ducati that was used in filming The Matrix Reloaded as well as some gems like his 1973 Commando 850 MK2A and his all-new 2019 KRGT-1 from Arch Motorcycles, the latest innovation from his bike shop in Hawthorne, California:

I love seeing actors/actresses have incredibly successful on-screen careers which enable them to kick off this second life of doing what they love.

In Keanu’s case, it’s building some of the finest motorcycles around at Arch Motorcycle. He’s always loved riding and through acting he’s been able to feed that passion. With guys like Seinfeld and Leno, it is cars. With Ashton Kutcher, it’s investing.

But the flip side of this is people like Gwyneth Paltrow’s ‘goop’ or whatever the fuck it’s called which has made a fortune selling snake oil. I hate seeing that. There’s no need to push completely bullshit products and holistic procedures on the world just because you have the means to do so…end rant.